We have a book and excerpt to share with all those spots romance fans out there! Check out Alicia Spark's SIN BIN! 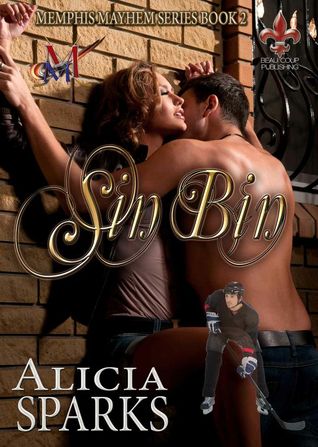 
Justine Rupf's entire life was built around hockey, from her father's Stanley Cup win when she was a kid to running the hockey themed bar, Sin Bin, across from the Memphis Mayhem's Hockey Center. She thinks of most of the guys as brothers except for the one who stole her heart years ago and has never given it back. Mark "Matrix" May knows his days as a professional hockey player are numbered, and he wants to spend the final years of his career in Memphis for several reasons, the most important being Justine "Ruff and Ready" Rupf, the girl who has always been the one for him. There's only one problem. Mark didn't make it to Memphis based on talent alone, and now the team owner's daughter is in town ready to blackmail Mark to get what she wants. He has a decision to make, and he knows no matter what he does, he's going to end up in the Penalty Box, a place known to hockey players as the Sin Bin.

“Did you really come here to skate?” She had positioned herself so there was plenty of board between them. He couldn’t just reach out and touch her. He would have to put forth a little more effort, which would give her time to try and talk herself out of this. Was she really going to go down this road with him again?

“I came here to do whatever it is you want to do.” His voice held a hint of a husky groan, and it sent a shiver down her spine.

Not enough space. His hand was under her chin again, lifting her face up to him. He had to bend completely over to be able to kiss her, but he moved as if it were no effort at all. When his lips met hers, it was not like the kiss in the bar. It was filled with red-hot need, and it coursed through her body all the way down to her toes.


There was nothing gentle about the way he explored her mouth or wrapped her ponytail around his hand to bring her closer and completely under his control. Her hands went up to his chest, but this time she didn’t try to push him away. Instead, she melted into him, thinking they would explode on impact if they took this any further. She should’ve known she didn’t stand a chance against Mark.


Alicia Sparks is a Southern girl with a flair for all things a little naughty. From writing about sensual ice cream to sexy tigers, her stories all contain a high level of heat, which she blames on her Southern surroundings and her smoking hot husband.
She has been writing for ten years and shows no signs of stopping any time soon!


GIVEAWAY:
The author is giving away one digital copy of SIN BIN to one reader. To enter, just fill out the rafflecopter below. Good luck!