Lexi: Isobel, nice spelling of your first name. A bit mysterious, a bit like you? It is a challenge to find anything about you online which creates an intriguing enigma.

Lexi – I actually write under a pseudonym, and for a very good reason.    All the inspiration and a lot of the action in Substitute, my first novel in this genre, came from the world I spend most of my days, and many of my evenings in.   I work in advertising in London and I’ve worked with clients from all kinds of industries, some of them pretty glitzy and glamorous. And what I’ve learned is, it doesn’t matter who you are, what you do, where you are from, how much bling you wear or how much money you earn, everyone wants the same things in life and everyone worries about the same things.   I get a window into  some pretty crazy and high  worlds in my job,  and all the politics and sexual tension that go them.

I am one of those people, that other people tell their stories to, they always have.  I think it’s because I am a good listener.    So Lexi, that’s why I don’t want to use my real name,   I think flying under the radar is much better if you want to be a writer as you can listen and watch and soak up everything around you much more easily.

I took the name Isobel from my great grandmother.  I never met her, but she sounded like a real firecracker.   She had a tough life but lived every minute of it.  I hope I can live up to the name with my writing!


Lexi: Your release, Substitute, falls under Contemporary Romance and Erotica. What drew you to the genre of Substitute?

I love telling stories and I love listening to other people’s stories.    So I guess it was inevitable that one day I’d end up writing.   I fell into this genre almost by accident. I was out with a friend one evening and she introduced me to a publisher friend of hers.   The three of us ended up having dinner and a lot of wine, and I mean a LOT of wine!

Several glasses of wine into the conversation the publisher asked me to tell her some of the stories of the things I’d seen and heard.  Well the stories came tumbling out didn’t they?!   There’s a scene in Substitute involving a one way mirror, three guys, two girls and a hidden audience,  and many people have asked me how I made that up, and they’re astonished when I explain that I didn’t.  And no, before you ask, I wasn’t there,  but the story was told to me by someone who was.   Even though the book is in the Erotic Romance genre, I think you still have to have a ring of truth in your stories!

I told the publisher how  hard  it can be for women to navigate the high octane worlds some of our advertising clients live in,   when they are looking for love.  There are a lot of very good looking, charming guys out there, but they’re usually  ambitious and ruthless and don’t want to get tied down.

So the publisher encouraged me to try my hand at capturing one of these worlds in a novel.  I already had experience of writing advertising copy and I’ve been writing short stories for years but never done anything with them.   I wrote three sample chapters and she loved them.   So Isobel the novelist was born, almost overnight!   I can’t believe how lucky I am, I guess it was fate having dinner with her that night.


Lexi: Your main character, Alexia, has to deal with some heavy baggage. She survived an abusive boyfriend, left him, and is now struggling between two very dominant men. Did her voice come easily to you, or did it push you emotionally?

Sadly her voice was all too easy.  I like many have experience of a bullying man, although not as bad as Alexia.   But it’s all too common.   I helped a dear friend through a divorce and lived almost breath of her agony in trying to leave him, then trying to build her confidence back up.   She is a very attractive woman and was instantly fighting off men, most of them who only wanted sex.  She was very vulnerable and needing affection but also needing to be strong.    I imagined what it would be like for someone as young and inexperienced as Alexia, trying to cope with all of this baggage, then being thrown into a lion’s den of a workplace.   I’ve seen quite a few like her in the workplace,  like Bambi, sliding around on the ice while the hyenas are watching.   She has needs like every woman, but how would she cope with that when the men around her are so predatory.   But I wanted to her to triumph, because there are nice guys out there, and the Nathan’s of this world,  the books hero,   can see what she’s worth.


Lexi: Substitute sounds like a book that will push a reader, stretch their emotions and comfort zones and engage them. You have had some good reviews, have you had any fun fan mail yet?

I have!   The book has been out in the UK for a little while and readers have really responded to Alexia.  I also think they love the glamorous setting,   it’s not a world everyone gets to see or live in, but it’s great fun to watch!    When people work in this kind of environment,  things are far less hidden than in most people’s lives.   The ambitions are naked,  as are many of the people, who will get naked at a speed that makes most people’s head spin.  They’re not slow in going for what they want, and it can be pretty raw.   Most of us take our time working out how to deal with the men we find attractive or who show an interest in us, but I wanted the reader to feel what it’s like to be thrown into the fast lane,  with all the insecurities and frailties we all have.

I can’t  tell you how thrilled I am to get such great responses for my first book.  Although so many have asked me when my next book is coming out,  I am starting to feel the pressure!


Lexi: Releasing a book is a long road and we are very happy for you that yours is out! Congrats on Substitute and thanks for stopping by the blog today Isobel!

Thank you Lexi.   Although I have to say, in keeping with the pace of my book,   writing this book and getting it accepted and published all happened really fast.    I guess I was just really lucky,  I met the right publisher at the right time,  who really believed in my writing.  I am so happy people like it! 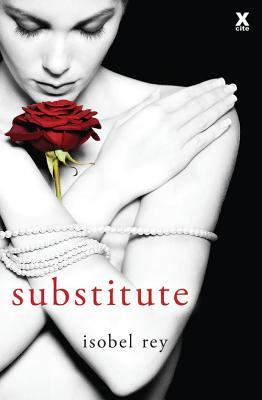 It took all of Alexia's courage to leave her abusive boyfriend. When old school-friend Romy offers her a temp job at the glamorous London sports agency where she works, Alexia thinks she is saved. But shy, blonde and beautiful, she is totally unprepared for the fast sexual politics of rich sports men, big money and ambitious women. After witnessing junior agent Tony having sex on the boss's table, her dormant sexuality is awakened with a violence that frightens her. Tony's sees her need and Alexia finds herself almost giving in to his desire to dominate her. But despite his devastating sexual charisma, she only has eyes for the boss. Nathan Fallon is the ex army officer, dazzling but damaged, who has risen to the top of the cut-throat world of sports agents. But he thinks she's Tony's latest conquest. Desperate to win his respect, Alexia agrees to become his substitute PA for a week. But Alexia finds herself trapped between one man bent on bending her to his sexual will, and another she cannot read. Can she navigate this whirlpool of fame, money, and sex to fend off Tony long enough to win Nathan?

Author Bio:
Isobel Rey is a Cambridge graduate. After interning at a stage/film talent agency, Isobel now works at a London advertising agency. This is her debut novel. Originally from Surrey, Isobel lives in London with her partner and a one-eared rescue cat called Thumper.

GIVEAWAY:
The publisher is giving away one copy of SUBSTITUTE to one reader (US/CA only please.) To enter, just leave a question or comment on this post for Isobel and then fill out the rafflecopter below. Good luck!