All I Want Is You by Toni Blake (Promo/Giveaway) 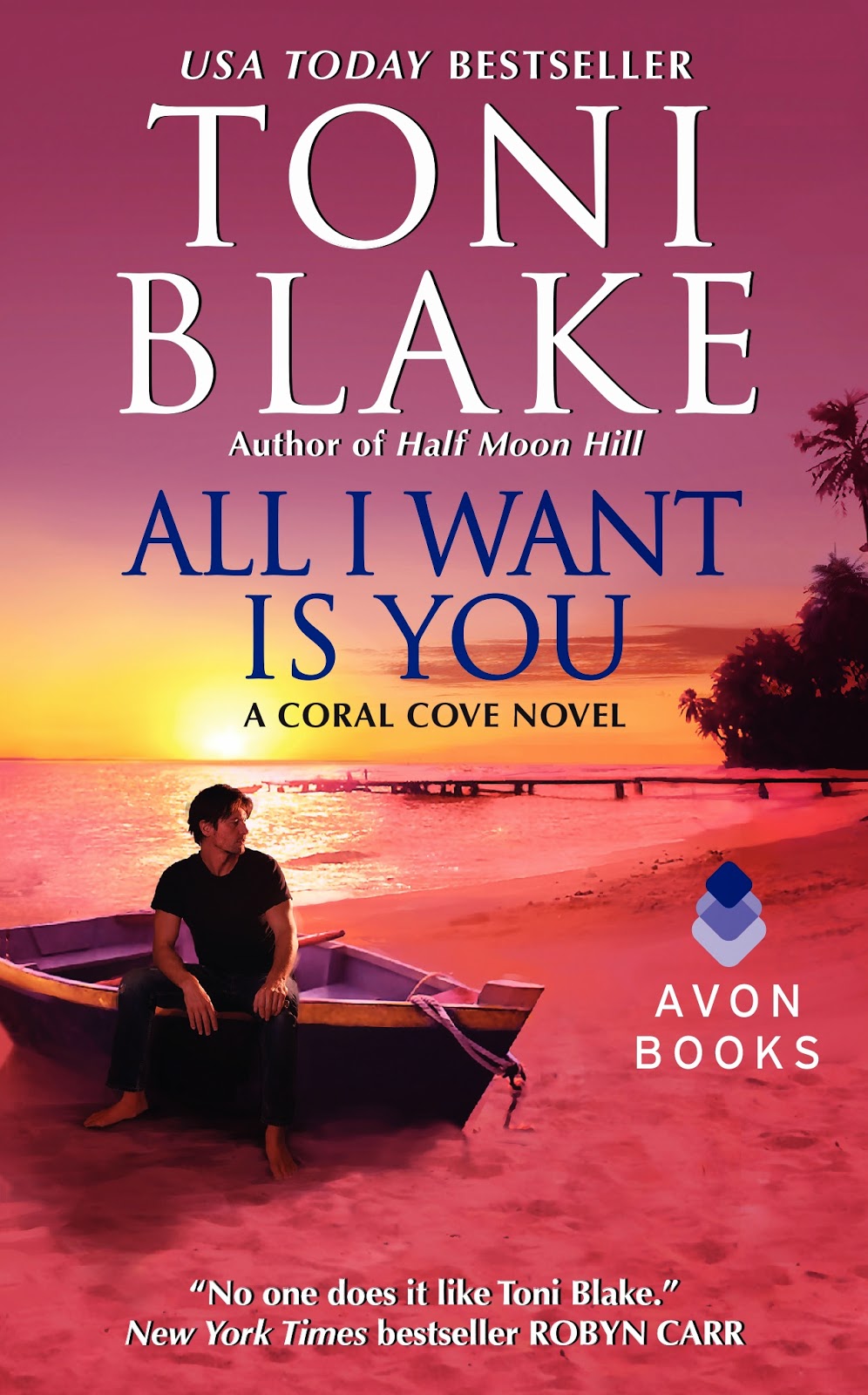 Sometimes you have to create your own destiny...

Christy Knight grew up in Destiny, Ohio, but lately she feels that her future lies elsewhere. Her parents are gone and the beautiful jewelry she creates doesn't pay the bills. Maybe it's time for Christy to grow up and find a guy who's smart, sexy, and solvent. Her rugged handyman neighbor fits the first two categories, but he's all wrong for her. If only he didn't have such captivating blue eyes.

When secrets are exposed, Jack and Christy struggle to find their way back to one another, but the quirky seaside town of Coral Cove could prove the perfect place to find a red-hot destiny of their own.

She raised her eyebrows at him and he realized how long she'd been sitting there waiting for him to finish – how long he'd left her hanging.  "Were you ... going to say something?" she asked gently.
So he told her the only truth he could right now – something else that burned in his soul and, at the moment, seemed more relevant than his own secrets anyway.  "I think you're amazing."
At this, her eyes widened and her mouth fell open in the shape of a soft 'o' and something about it was more than he could handle.  He had to kiss her again.
And so he lifted one hand to her cheek and lowered his mouth over hers.  The kiss moved all through him, like something expanding inside him, becoming the biggest part of him.  And as he let himself get lost in it, he decided he'd made a damn good decision because making out with her was a lot more fun than confessing a hurtful past.  Making out with her, in fact, felt better than anything he'd done in a long time.
She leaned into his kiss, leaned her whole body into his, in fact.  He wasn't sure anything had ever felt quite so good as the warm cotton of her t-shirt, the soft globes of her breasts underneath, as they pressed against his chest.
Still kissing her, letting it consume him more with each passing second, he followed the urge to lay her back on the bed.  She wrapped her arms around his neck, pulling him down with her, and his hands began to roam her curves.
Between kisses, she sighed prettily as his touch slid upward from her slender waist over the soft cotton.  And when he eased one hand over her breast, the turgid peak jutting through against his palm, he found himself deepening the kiss, pushing his tongue into her mouth.  She met it with her own and his cock began to harden.
Her feminine breath went ragged as he teased her nipple between his thumb and forefinger through the T-shirt.  He wanted to kiss her there.  He wanted to kiss her everywhere.  He'd truly thought he could share a room with her platonically enough when the plans had been made – but now … now he couldn't imagine anyplace could feel any sweeter, hotter, than to be making out with Christy Knight in a crappy little motel room in the middle of nowhere.
Soon her legs circled his hips, pulling him to her until the column of stone between his legs – he’d gone rock-hard now – met the soft juncture of her thighs.  Though layers of clothes rested between them, they were soft clothes, the kind that let him feel exactly how soft she was in that particular spot – and he knew she felt how stiff he'd gotten for her, too.
She was panting now as he moved his kisses from her mouth onto her delicate neck – and soon he was kissing his way onto her supple breast, then capturing one beautifully taut nipple between his teeth through the cotton fabric.  The moan that echoed from her throat in response nearly buried him, seemed to wrap all around him – and it made him sink his body somehow still deeper onto hers as he began to move, to thrust, almost involuntarily, between her thighs.  Damn, he wanted nothing between them, wanted to drive himself deep, deeper, deepest inside her.
He wanted her so badly that he could hardly decide what to do next – push up her t-shirt or to take off her pants.  As his hands eased up under the long hem of the oversize shirt, his fingers curled into her waistband and the decision was made.
He gave a soft tug and she lifted her ass, letting him pull the sweatpants down.  Flinging them aside, his eyes landed on the panties he'd just revealed – white cotton with pale pink polka dots.  Perfect and sexy and cute as hell.
"You're beautiful, honey," he murmured, his focus still on her hips, then moving more pointedly to the crux of her thighs.  He slid his palm upward on one of those silky thighs, stopping at her hip to close his fingers around the pink elastic band, and his voice dropped to a mere rasp as he said, "Wanna take these off, too."
Her quick breath of excitement drew his gaze to her face, where he found her eyes heavy-lidded, her expression passion-filled and ready.  "God, I want you, Jack," she murmured.
He followed the urge to bend nearer, to lower a gentle kiss to the skin just above her panties and below her belly button.
In response, another brisk, sexy intake of breath from above.
"I want you, too, honey," he said deeply against her tender flesh.
And as he eased the fingers of his other hand into the pink elastic, ready to rid her of the panties altogether, she lifted her hips slightly to let him, and she said ever-so-softly, "You're only the second guy I've ever done this with."

ALL I WANT IS YOU is a brilliant start to a heartwarming and sexy series, filled with Blake’s relatable blend of inspiring, passionate stories of hope and new beginnings. Readers will fall in love with the seaside town of Coral Cove and its quirky characters over and over again.

USA Today bestselling author Toni Blake’s love of writing began when she won an essay contest in the fifth grade. Soon after, she penned her first novel - nineteen notebook pages long. Since then, Toni has become a RITA-nominated author of more than twenty contemporary romance novels including her recent 2014 RITA nomination for Half Moon Hill the last installment in her popular Destiny series. Her books have received the National Readers Choice Award and the Bookseller’s Best Award, and her work has been excerpted in Cosmo. Toni lives in the Midwest and enjoys traveling, crafts, and spending time outdoors. Learn more about Toni and her books at www.toniblake.com.