Out of Bounds by Dawn Ryder (Interview/Giveaway)

You can find our guest’s books under Ellora’s Cave and Sourcebooks Casablanca, but you will always find them full of steamy scenes sure to keep those pages turning. Welcome Dawn Ryder!


Lexi: Your newest release from Sourcebooks Casablanca, Out of Bounds, has such a striking cover! Check it out dear readers, over there to the right. A man in a tux is always a turn on, and he is slightly disheveled with his bow tie undone and those kissable lips. Does this cover match the feel of your book?

I think it does. I wanted to explore the idea of an explosive meeting. You know, that moment when you do a double take because the guy is that hot?

Lexi: When you have someone like Sylvia Day calling your books, “Deeply romantic-” you have to get a bit of a rush don’t you? Does it still hit you that you are a successful writer, or is it just another day at the office after so many releases?

I’m not sure I’m successful. Honestly, the feeling is a little more…hum…like hanging off a ledge and knowing I’m dead when I fall. I am really stoked about the quote from Sylvia. She rocks!

Lexi: New books are always fun. And in Out of Bounds you have two great names for your MCs! Sabra and Tarak (love this!). Where oh where did you come up with those names?

Tarak is Apache. So is the character.

Lexi: Do you ever worry that you will run out of characters or stories to tell? Or do you wonder if your sex scenes might start to sound redundant?

I think I’d be arrogant to not worry about it. That’s the mark of a good writer, always push yourself. As for running out of characters? Honestly, I wish I could write faster, because more keep showing up!

Lexi: With diverse characters like Talon, Trenton, and Nigel nothing is redundant. Congratulations on Out of Bounds! Thanks for stopping by Dawn! 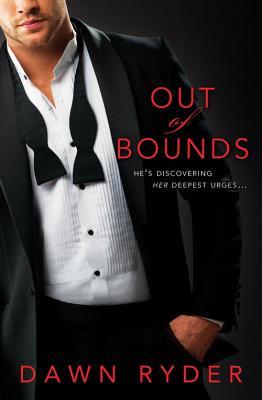 
Power may be best when it's shared...

He's used to dominating...
Tarak Nektosha is a self-made man, against all odds. He accomplished that by making sure he's the one in charge, both in the boardroom and in the bedroom.

She's taking her power back...
Sabra Donovan has ambition to spare and energy to burn. So what if her last lover was a disappointment? She's never going to be anyone's plaything ever again.

Sabra's outstanding performance at a corporate photo op attracts Tarak's attention, and the lines begin to blur. What happens when the one on top surrenders and the one used to obeying begins to call the shots?

“You’ll do nicely,” he announced, one pace in front of her.
He plucked the wineglass from her distracted fingers and handed it off.
“Excuse me?” she managed to thrust past her frozen lips.
“Sabra Donovan, analyst, master’s in bio fuels. Correct?”
It sounded as if he only added the last word as a courtesy. There was certainly nothing questioning in his sharp gaze. He knew exactly what he wanted and intended to get it. The pure abundance of confidence was mesmerizing.
“I think you have me at a disadvantage,” she muttered.
Pleasure flashed in his eyes. His lips twitched up just a tiny fraction, almost too faint to measure, but she saw it. In fact, she was sure he wanted her to notice. He wasn’t the sort who apologized for anything.
Arrogant too.
He was—and completely unashamed of it.
“I’m your boss.”
She stepped back, something inside of her recoiling. The hot curl of excitement was lingering in her clit, so she wasn’t really sure what it was she objected to, only that complete submission was out of the question. It wasn’t a conscious thought, but something she felt on a very personal level.
His eyes narrowed, somehow becoming more sensuous, more determined.
“Excuse me,” he offered softly. “Tarak Nektosha, your employer.”
She was a complete idiot. He wasn’t Japanese; he was Apache. Lawless, savage, and exactly like the line of vehicles his company produced.
“I require someone to help me cut the ribbon,” he clarified.
“Oh…” She glanced back at the waiting table. The press was positioned near it, their hands on their cameras, more than one was casting an impatient look toward Tarak. “Sure.”
As far as a professional response went, it lacked a lot. But saying “yes, sir” just seemed too submissive. A large part of her flatly rebelled. It was a system-wide rejection, one she was sure she hadn’t experienced before in her life. No man had ever unleashed such a bundle of emotions inside her.
Or so much heat.
Get a grip, girl…
And fast too. It was her frickin’ boss.
He caught her hand. The contact was jarring. She flinched, pulling free. His lips curled, just a tiny amount, flashing his teeth at her before he reached out and renewed his grasp on her hand. His gaze settled on her lips for a moment, causing her breath to catch.
“They are ready for you, Mr. Nektosha,” one of the dark-suited bodyguards informed him quietly.
“Of course.”
He stepped forward, settling her hand on his arm. His shoulder rose above her own as he swept her toward the table. She felt petite and scoffed at her own foolishness.
She was wearing a garter belt for Christ’s sake.
But you’re trembling like a virgin.
“Smile at them…” he leaned down and whispered. “And at me.”
He kept a firm hand on top of hers as he guided her toward the tables. The distance seemed to triple as the camera lenses were pointed at her. The flashes popped, blinding her to everything but her escort. Everyone beyond them was just a shape in the shadows.
Tarak was right at home. He strode down the path, nodding at those waiting to see his performance. The quartet played a fanfare as they arrived at the velvet ribbon. He eased her into place, the position of his hand perfect. He just seemed to know how to touch her. One hand cupping her hip and slipping across her lower back to gently push her in front of him. Once he was behind her, she shivered as his size dwarfed her. He caught her hip once more, his fingers spreading out over her belly and securing her in place. The breeze coming off the ocean was cool, but she could feel his body heat against her back. She was still caught in the hold of arousal. Her clit was throbbing and whining for attention.
Her timing couldn’t have been worse.

Giveaway:
The publisher is giving away one copy of OUT OF BOUNDS to one reader (US/Canada only please). To enter, just leave a question or comment for the author below and then fill out the rafflecopter below. Good luck!