We are thrilled to share with you an excerpt from K.A. Tucker's FIVE WAYS TO FALL!! FIVE WAYS TO FALL is the fourth novel in her Ten Tiny Breaths Series, published by Atria Books an imprint of Simon & Schuster. 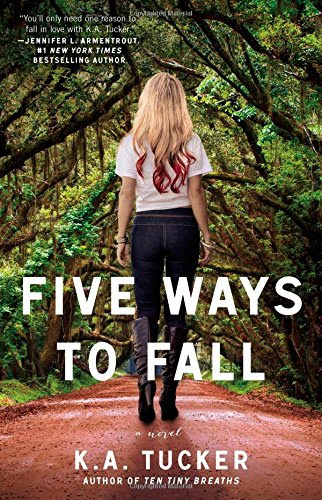 Purple-haired, sharp-tongued Reese MacKay knows all about making the wrong choice; she’s made plenty of them in her twenty-odd-years. So when her impulsive, short-lived marriage ends in heartbreak, she decides it’s time for a change. She moves to Miami with the intention of hitting reset on her irresponsible life, and she does quite well…aside from an epically humiliating one-night stand in Cancun with a hot blond bouncer named Ben. Thank God she can get on a plane and leave that mistake behind her.

I’ve been eviscerated on a Monday morning. My guts are splayed all over the dark gray office carpet for all to see.
And I can’t breathe.
What the hell is this guy doing in my office?
He’s as shocked as I am, obviously. That loud boom of “holy shit!” that probably carried through half the floor and has all the little old hens peering over their bifocals at us can attest to that.
And now he’s staring at me with wide, disbelieving eyes. “Jill? Is that you?”
“You don’t recognize your one true love?” That might have sounded witty had my voice not been shaky and my cheeks not been burning hot. For a pro player like this guy, the fact that he remembers my fake name says something. I was definitely memorable.
“You look so . . .” His voice drifts off as those baby-blue eyes roll over my all-blond hair and land on my face. “No more piercings?”
Not trusting myself to speak again, I tap the pinhead-sized diamond stud in my nostril. I’ve taken the septum ring and the majority of my ear piercings out, though. Part of this whole “new me” thing I’m trying.
Ben’s head bobs up and down slowly as if still trying to process this. Then his focus drifts down to my chest and his eyes narrow. I swear he’s trying to make out the outline of the metal ring that’s hidden there.
And I’m trying to control the hyperbolic flashback that took weeks to suppress—there’s just no way vomit shoots out of a person like a fire hose!—as the walking, breathing proof of one of my most mortifying nights stands in my office.

...and you can Preorder…

IN HER WAKE: A Ten Tiny Breaths Novella