Welcome back! Today author WJ Craft is joining us with her book, Chicks in Charge, and a custom flash fic to go with our Mythology Romance theme this month. Enjoy!
At Last
by WJ Craft
She lay weeping and shaking on the forest floor, too tired to run, too
exhausted to care any longer that they were almost upon her. She could
hear the chase hounds baying, but it was impossible to tell how far
off they were. It didn’t matter anyway, she hadn’t the strength to
stand.
The snapping of a branch made her look up, the weariness clear in her
eyes as her hands clutched at the dried leaves under her.
“M’lady.”
The voice was deep, almost baritone, and held a gentle strength. As he
parted the thick undergrowth with perfectly muscled arms, she could
see a kindness and concern in his brown eyes that she had never seen
in a man before. A tiny spark of hope kindled inside her. 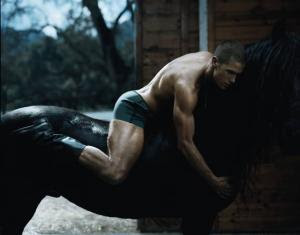 The first of the dogs burst out of the brush and leapt for her throat,
but before she could scream, a thunder of brown swept her up and
kicked the dog back from where it had come. Then they were off and the
greenery rushed by as they galloped off at an impossible speed. Escape
had come.


She held onto him tightly as they raced on, deeper and deeper into the
woods, the glossy coat of a fine stallion under her and the smooth
muscles of a fine man before her. She nearly slipped off several
times, but he held her there close until he deemed them both safe from
the chase. Then he slowed to a walk and she finally realized what had
happened.
Fascinated, she caressed the union where the human flesh gave way to
an equestrian broad back, soft fuzzy hairs transitioning to the
stiffer hairs underneath her. He stopped then and looked at her over
his shoulder, clearly enjoying the unfamiliar sensation of a woman’s
caressing hands.
She was unable to stop herself. Onward her hands explored this strange
and beautiful creature, stopping only long enough for him to help her
off his back. Then she resumed, running her fingers over every inch of
his body. Every inch.
They both gasped as his sizable equine member unsheathed itself at the
attention. His eyes closed in ecstasy as she knelt and explored it
with fingertips then, finally, her tongue.
The forest shivered with their sounds and motions until darkness fell
and the moon rose. She was safe and well-loved at last.

An Erotic Short Story Collection
Over 20,000 words of intriguing and playful delights where women come out on top in a variety of ways!
Chainsaw Chicks of Chinese Camp: Are the legends true? Are four amazons lying in wait in this tiny rural town for their perfect boy toys to come along and play with them?
Zap: While researching a possible preventative for epileptic seizures, a scientist stumbles onto a very interesting use for her new app.
Take Me To Your Leader: In this 1940s retro tale, a military translator gets up close and personal with some newly-landed alien emissaries.
The Gnome World Order: Find out what really goes on underneath those seemingly innocent pointed red hats.
Little Shoppe of Enchantments: Augustus Pound takes a wrong turn with some rather questionable results. This version includes the longer alternate ending, not available anywhere else!
Cowboy: They seemed like ordinary women in the greasy spoon in town, but they had plans for Jack Barnes and his equipment.
Rosa Erotica: Lyrical and touching. A 500-word ode to the spirit of the rose goddess and a warrior's epiphany.

Website / Twitter
Excerpt
The Zap App
The next day, she made a few alterations to her application, reversed
a few things, and then waited for Richard to make his morning
appearance. She didn’t have long to wait.

“Good morning,” he said, right behind her ear.

“Good morning, Richard,” said Veronica, then she tapped the button.

Instantly the sound of coffee splashing all over the floor met her
ears, and she turned to see her nemesis staggering backwards until he
crashed into the cubicle wall, which threatened to topple into the
next space over. His eyes were partly rolled up into his head and he
was moaning and gasping, his twitching body slowly sinking
horizontally onto a filing cabinet. With a grin that was triumphant,
surprised and slightly sadistic, she tapped the button again to see
what would happen when she turned the app off.

A noticeable wet stain at the front of a medium-sized pants tent
caught her attention. Had the poor man wet himself?

“Ohgod,” was all he could manage for at least five minutes as he
recovered. Veronica began to wonder if she should call a medic, and
coworkers started to crowd in her doorway to see what the hell had
happened.

“It’s all right,” she reassured them. “Still working on that epilepsy
app. Must have reversed something.”

“That was... that was...” Richard spit out, trying to regain the gift
of language. “Fucking incredible...”

Confused, Veronica stared at him.

Now that, she hadn’t expected. But something about it sounded vaguely
familiar. She turned her back on her human lab rat as the embarrassed
coworkers made themselves useful elsewhere. A quick search on
“epilepsy” and “orgasm” brought up research on the phenomenon known as
the “orgasmic aura,” a state of spontaneous climax that some epilepsy
victims experienced at the onset of a seizure. She could hear Richard
slowly collecting himself behind her.

“Do it again!” His hand gripped her shoulder and she turned, finding
herself face-to-face with a pair of desperate, lust-filled eyes. His
other hand shot out and gripped her throat. Unable to cry out for
help, she did the only thing she could think of to incapacitate the
madman – she hit the button again.

~*GIVEAWAY*~
WJ Craft is giving away an ebook of Chicks in Charges to one reader. To enter, just leave a question or comment for the author on this post and then fill out the RaffleCopter below. Additional entries are available but not required. Good luck!