As part of our Mythology event this month and to kick off our week of Mythological Romance book features, I would like to welcome the fabulous, Elisabeth Naughton, over who is joining us with her absolutely mind-blowingly awesome new release, Enraptured!
Thanks so much to the crew at Reading Between the Wines for inviting me to stop by during the release of ENRAPTURED! I’m so excited about this book because it’s the first book in my series where readers get to meet the Sirens.
What’s a Siren, you ask? Well, if you’re familiar with Greek mythology at all, you know the sirens were these beautiful women who lived in the sea, had amazing voices, and used to lure sailors to their deaths. Gorgeous, seductive, deadly. In my Eternal Guardians series, the Sirens are female warriors who serve Zeus. Basically, they’re assassins, and anytime Zeus has an issue with someone, they get sent to take care of the problem. 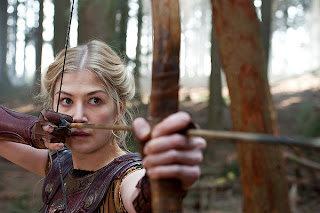 The Sirens are super fun to write. They’re hot, kickass, tough women who are as alpha as the Eternal Guardians themselves. And even though the sirens from Greek mythology are different, I tried to pull from the myths when creating my female race of warriors.  Staying true to the myths is important to me, even though I often take those myths (like in the case of the sirens) and twist them around to fit my world. For that reason, my kickass alpha Siren heroine—Skyla—has an amazing voice. Even if she doesn’t rely solely on that voice to lure and kill as the original sirens did.


I’m a big fan of parallels. For that reason, readers will see parallels in my books with stories from Greek mythology. For example, in Greek mythology, Orpheus was the hero who ventured into the Underworld to try to rescue his wife. While that myth ended tragically, lovers of the ancient myths will easily pick up on the fact my Orpheus, the hero of ENRAPTURED, also ventures into the Underworld, but to try to save his brother, not his wife. The Sirens are another parallel—especially their link to Orpheus the legendary hero. In the ancient myths, Orpheus was the one hero who was able to tame the dangerous sirens with his lyre so the Argonauts could sail past on their quest with Jason for the Golden Fleece. In ENRAPTURED, my Orpheus is the only person who’s able to break through my tough, kickass Siren’s shield and tame the warrior within.  Again…parallels.
For me, writing about Greek mythology is fun because there are so many different stories to pull from. And as a romance author, I love taking the tragedies and twisting them around in the modern world so that the characters get their happily ever afters. It never gets boring for me, and it’s especially fun when readers recognize the myths I’ve pulled from. And for those readers who aren’t familiar with a lot of Greek mythology…? They’re getting a lesson in the ancient myths and don’t even know it!
To celebrate the release of ENRAPTURED, Sourcebooks is giving away two copies of the book. Just tell me what your favorite Greek myth is to be entered in the drawing!
ENRAPTURED BY ELISABETH NAUGHTON – IN STORES APRIL 2012

Orpheus—To most he's an enigma, a devil-may-care rogue who does whatever he pleases whenever he wants. Now this loose cannon is part of the Eternal Guardians—elite warriors assigned to protect the human realm—whether he likes it or not.
Orpheus has just one goal: to rescue his brother from the Underworld. He's not expecting a woman to get in the way. Especially not a Siren as gorgeous as Skyla. He has no idea she's an assassin sent by Zeus to seduce, entrap, and ultimately destroy him.
Yet Skyla herself might have the most to lose. There's a reason Orpheus feels so familiar to her, a reason her body seems to crave him. Perhaps he's not the man everyone thinks... The truth could reveal a deadly secret as old as the Eternal Guardians themselves

A former junior high science teacher, Elisabeth Naughton traded in her red pen and test-tube set for a laptop and research books. She now writes sexy romantic adventure and paranormal novels full-time from her home in western Oregon, where she lives with her husband and three children. Her work has been nominated for numerous awards, including the prestigious RITA Awards of Romance Writers of America, the Australian Romance Reader Awards, the Golden Leaf, and the Golden Heart. When not writing, Elisabeth can be found running, hanging out at the ball park, or dreaming up new and exciting adventures. Visit her at www.elisabethnaughton.com to learn more about her and her books. Her next book in the Eternal Guardians series, Enslaved, will be in stores in November 2012.
~*GIVEAWAY*~
As Elisabeth mentioned, Sourebooks is giving away a copy of Enraptured to two US or Canadian readers! To enter, just leave a comment on this post answering the author's question and then fill out the RaffleCopter below. Additional entries are available but no required. Good luck!
a Rafflecopter giveaway