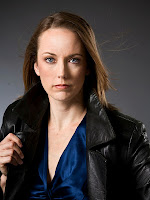 Welcome to mythology month here at Reading Between the Wines Jessica, fortuitous that your book Magic Unchained was released this month.
Thanks so much for inviting me!
This is book seven in your Nightkeepers series which brings together prophecy, gods, demons and warriors. Sounds like the perfect ingredients for bringing to life an old myth/legend. Did you research a lot of Mayan (or Aztec serpent worship) mythology before you started the series?
Absolutely! Actually, it was a little bit the other way around, as I’ve always been fascinated with Mayan and Aztec mythology (I spent some time ruin ratting as a kid and it really made an impression), so when I came across a reference to the potential 2012 doomsday of the Mayan calendar, I was like, ‘Score! An excuse to read up on Mayan mythology and call it work!’ And thus the Nightkeepers (modern day men and women who are busting butt—and making love-fueled magic magic—to save us from the 2012 doomsday) were born.

I won’t limit you to the Mayan’s; you have also written Lord of the Wolfyn that dabbles in some myth type creatures. So do you have a favorite myth or mythology character?

Warning-I’m the person who goes blank when asked for their favorite book or movie. Snicker. Honestly, though, I can get behind almost any myth, especially when it comes to brainstorming a story. The Lord of the Wolfyn was a fun project, a four-book series I wrote with super-authors Gena Showalter, Jill Munroe and Nalini Singh. We each picked a fairy tale to retell in our stories, and connected them in a magical world where four siblings must reunite to save their kingdom from the terrible Blood Sorcerer. I did Little Red Riding Hood with the wolf as the hero, and had a blast!! For more on the series, check out http://paranormalromanceblog.com/royalhouseofshadows/
The ominous 12-21-12 will happen this year. And as long as life as we know it continues, will this affect your plans for this series at all?
The series ends in 2012, one way or the other! I had always planned for it to be an eight or nine book series that concludes at the end of 2012. The finale, SPELLFIRE, will be out in November of this year, and I can’t wait to share it with readers.
My favorite hero name in the Nightkeepers series is Jaguar Strike, closely followed by Nate Blackhawk. Not that I know much of anything about Mayan mythology or legends but did your knowledge affect the names you chose for your heroes and heroines?
Absolutely! The ancient Mayan kings had names like Ten-Boar and Wind-Frog, which I thought were way cool. But the Nightkeepers live hidden among us in the modern day, and their names reflect that. Strike is the king, so his name is pretty traditional, but warriors like Nate Blackhawk (of the hawk bloodline), Alexis Gray (smoke bloodline), and Jade Farmer (harvester bloodline) have names that fit better into modern society, while still giving nods to their heritage.
With your imagination I am glad you ended up writing instead of continuing genetic work, though there may be elderly people out there with glaucoma cursing your choice. But I am sure that is only because they still have glaucoma and can’t read your amazing books! But we sure can so Thanks for stopping by and telling us about your series Jessica!
If it helps, I’m still involved in science J. I do technical editing of journal articles in a variety of fields, ranging from panda genetics and cancer drugs to developing schools in Africa and looking at the early fallout of the tsunami in Japan. That being said, my first and best love is action-packed romance with a heavy dose of mythology! Thanks so much for having me, and to your readers for stopping by and checking out this interview. Have a fabulous 2012, and may the future bring you wonderful things!
For more on MAGIC UNCHAINED, the Nightkeepers, and the Wolfyn, please check out www.jessicaandersen.com.
Thanks for stopping by Jess! It was fun finding out more about your inspiration and your books. Congrats on the new release! 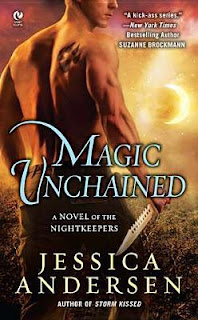 Cara Liu is determined to unite the forces under her leadership but when Nightkeeper Sven enters the scene, Cara has trouble separating her duty to her people from her desire for her ex-lover. Their secret affair will not only jeopardize a tenuous alliance among the Nightkeepers, but it also distracts them from a danger within their own ranks planning a vicious betrayal...

About the Author
Jessica S. Andersen is an American writer of mystery and medical romances. She obtained a PhD in Genetics, but when she finally settles on a single career, she will have been many things: a doctor of molecular genetics, a patent agent, a freelance editor, a professional horse trainer and riding coach, a fiance and the proud owner of a pair of corgis. But if you ask her who she is, Jessica will say, "I'm a writer. The rest is all background research."
Jessica lives in a small farm in eastern Connecticut with her own personal hero, Brian, as well as the corgis, two cats and a handful of young horses, who she claims are investments but never seem to get sold.

~*GIVEAWAY*~
Jessica is graciously giving away a copy of Magic Unchained to one reader! To enter, just leave a comment on question for the author on this post and then fill out the RaffleCopter below. Additional entries are available but not required. Good luck!
a Rafflecopter giveaway