ARC Review: The Saint Who Stole My Heart by Stefanie Sloane 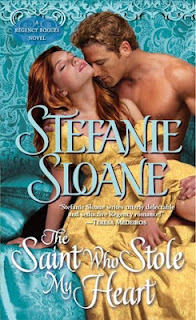 Possessed of a brilliant mind and a love for puzzles, Dashiell Matthews, Viscount Carrington, is a crucial member of the elite Young Corinthians spy league.Assuming the façade of an addle-brained Adonis, he hunts for a notorious London murderer known as the Bishop. When fate causes him to cross paths with Miss Elena Barnes, Dash discovers an enigma that will prove delightfully intoxicating to unravel: a voluptuous beauty as intelligent as she is fearless. Only the lure of a collection of rare books bequeathed to her family by Dash’s late father could tempt Elena from her cozy rural life to the crush and vanity of London. But if Elena finds his lordship to be the most impossibly beautiful man she’s ever seen, he also seems to be the stupidest. Which made her body’s shameless response to his masterful seduction all the more unfathomable. Yet when she discovers Dash’s mission to track the dangerous Bishop, she willingly risks everything—her trust, her heart, her very life—to join him.

Goodreads
Purchase at Amazon, Barnes & Noble, and The Book Depository
Lexi's Thoughts:
With the opening scene being a murder scene you might expect The Saint Who Stole My Heart to be a mystery, thriller, who-done-it type of book. And there is some of that, but mostly you get a great love story between a book loving woman and a danger courting man. Could two people seemingly so different have anything in common or any attraction?
No question there is attraction between Dash and Elena. He is one of those impossibly perfect men, the face of a god. Thankfully he has more to him than his vapid personality suggests, there are some serious brains and balls of steel being carefully hidden. As for Elena, she is a voluptuous woman with a brain in her head in a time when neither were considered desirable in a woman. Good thing Dash isn’t conventional or follow trends of the ton.
Underneath the love story that slowly blossoms is a murder mystery. Throughout the book you get little clues here and there as Dash and his friend Nicholas follow leads. Solving the case is personal for both of them, and you get wrapped up in their need for revenge. Sloane gives enough completion for a nice ending, but also some big questions unanswered to leave you hanging. Sloane not only writes clever characters but she is one herself, you will want to read the next Regency Rogues book to find out if they get their answers and revenge.