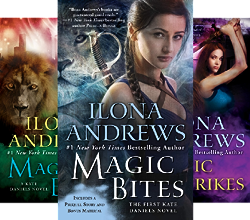 The world has suffered a magic apocalypse. We pushed the technological progress too far, and now magic returned with a vengeance. It comes in waves, without warning, and vanishes as suddenly as it appears. When magic is up, planes drop out of the sky, cars stall, electricity dies. When magic is down, guns work and spells fail.


It’s a volatile, screwed-up world. Magic feeds on technology, gnawing down on skyscrappers until most of them topple and fall, leaving only skeletal husks behind. Monsters prowl the ruined streets, werebears and werehyenas stalk their prey; and the Masters of the Dead, necromancers driven by their thirst of knowledge and wealth, pilot blood-crazed vampires with their minds.


In this world lives Kate Daniels. Kate likes her sword a little too much and has a hard time controlling her mouth. The magic in her blood makes her a target, and she spent most of her life hiding in plain sight. But sometimes even trained killers make friends and fall in love, and when the universe tries to kick them in the face, they kick back.


Crystal's Thoughts:
I have a confession to make. I started the Kate Daniels series for one reason only – Curran. Who was this sexy lion that made my fellow readers squee and dedicate entire blog posts, Goodreads groups and Twitter chats to?
At first, it was very hard for me to get into the story and I blame it on all the hype. Going into the first book I knew that this was an urban fantasy series but because of all the Curran lusting I expected there to be some romance involved with a certain sexy Beast Lord. Also, I had a tough time understanding the world built around Kate Daniels and this new Atlanta until it was furthered developed a few books in. But let’s get to the actual novels...

Magic Bites begins the series and thrusts readers into a post-apocalyptic world of magic vs. technology. We are introduced to Kate Daniels, a magical mercenary. Kate’s guardian has been murdered and she is determined to uncover who or what is behind it. However in doing so, Kate unexpectedly finds herself in the middle of two opposing factions. The Masters of the Dead; which are basically necromancers who control vampires through their mind, vampires being undead bodies that when not being piloting by a Master of the Dead become the thing of nightmares. And Atlanta’s shifter Pack, which is one of the biggest packs in the country and ruled by the Beast Lord. Forced to work side-by-side with the terrifyingly powerful Lord, Curran, Kate uncovers a frightening possibility.
The world-building in Magic Bites left something to be desired, I was pretty confused throughout the novel not knowing how the world became this way and what the rules were. Kate is a fantastic heroine though with balls of steel. Sarcastic and hugely independent she doesn’t let anyone too close to her thanks to her father’s teaching and a deadly secret she carries. Upon Kate’s first meeting with Curran it’s a game of cat and mouse, these two are like oil and vinegar though you know that such intense heat can only lead to one thing…in the future. There are no romantic aspects to Magic Bites though it does lay some ground work and Curran instantly intrigues. Humorous dialoged and plenty of action kept me turning the pages and it was good, but not great.

The second novel, Magic Burns, pretty much continued in the same fashion for me. Kate is somewhat coerced into taking a job from the Pack. Retrieve a set of maps that were stolen, maps that if the wrong hands could harm the Pack. However, nothing can ever go smoothly for Kate. While searching for the missing maps Kate comes upon a young girl looking for her mother. Kate relates to this young girl, Julie, as a person who has lost her own mother and is determined that the same will not happen to Julie.
When Kate finally catches up to the thief she learns that because of a magical flare about to hit the world, a God and Goddess are both battling to get through a portal and into their world. Neither of whom would be a good thing walking down the street. Kate does begin to grow as a character in Magic Burns, with the help of a few friendly relationships. The girl Julie for one, and surprising the thief who may not be such a bad guy and I found myself actually rooting for. Maybe it was because he annoyed Curran so much? LoL Curran and Kate have a bigger interaction in this novel when Curran’s ex-lover asks Kate for help in convincing Curran to allow her to marry Kate’s own ex-boyfriend. Talk about your awkward moments! Though again this second novel was a struggle for me, maybe because of the lack of a romantic involvement, I still found myself not being about to put it down.

With Magic Strikes, I am finally feeling the hype. This is obviously a series that gets better with each book and I am glad that I stuck with it. Working for the Order of Knights of Merciful Aid tends to open up some doors that were closed to Kate as a mercenary but they seem to get a few slammed in your face too. When her friendly neighborhood werewolf, Derek, ends up half dead, though she uses her new status and a friend in high, or maybe low?, places to get into the Midnight Games. A deadly gladiator style game for the supernaturals, Kate and the gang enters as contestants to find out who is behind Derek’s attack and other shifter murders. Lots of heart stopping action, laugh out loud humor and yes, FINALLY, some romance! This is where it starts to get good my friends, bath scene anyone? I finally understand what is going on in this sometimes magical world, I have also somehow come to love all of these characters in the Kate Daniels series and can’t get enough of the back and forth between Curran and Kate. Curran is obviously interested in Kate, though she drives him crazy, but Kate is plain oblivious and even after her relationship growth (forming new friendships) she is still reluctant to become romantically evolved with anyone, period. Will Kate ever give in to her attraction? Will Curran take charge of the situation? What craziness will be thrown their way next? I must know!

The fourth installment of the Kate Daniels series, Magic Bleeds, is by far my favorite of the series. Horrid monsters conjured by Mages are roaming free in Atlanta. When Kate is called into a fight at a bar she discovers a deadly disease spreading to shifters. This is not something that can be cured by medicine though, but a magical attack by a thousand year old warrior-ess who happens to be related to Kate!
I absolutely LOVED this book! Ilona Andrews provides readers with immense depth and history to the Kate Daniels’ character in Magic Bleeds and I adored delving into her further. Kate is such a kick-ass heroine who yes, you want to shake on occasion, but someone you definitely respect as a main character. If you like Cat from the Night Huntress series and Mira from the Dark Days series then you will love Kate. AND all the back and forth, tension and build-up between Kate and Curran finally reaches a climax and we get SEX! *fist pump* At the beginning of the book this didn’t seem possible and the relationship between the two turned heartbreaking but the author(s) masterfully came through for their readers! Curran is the ultimate alpha; arrogant, domineering, protective and possessive, loving and damn sexy. I am so on the Curran love train now, hot damn! There is so much passion between Kate and Curran I was beginning to get hot flashes of my own. So much is packed into Magic Bleeds; death defying fight scenes, edge of your seat suspense, flaring passion, gut wrenching circumstances – the characters and story line explodes from the pages. Hard hitting, emotionally packed Magic Bleeds is finally what I expected coming into this series. I never wanted it to end!

The most recent release in the Kate Daniels series, Magic Slays, finds Kate and Curran adjusting to mated life and Kate opening an investigative business of her own, Cutting Edge. When Ghastek, a Master of the Dead, asks Kate for help bringing in a rogue vampire they discover that there is something interfering with the navigator’s piloting and this could be deadly for more than just the citizens in the way of a loose vampire. Something or someone is interfering with the magic in the city, bringing it down in crucial areas, and if Kate doesn’t stop whoever is behind the scheme it could mean devastating things for the whole world.
Though Magic Slays didn’t have that extra oomph I found in Magic Bleeds it was still a wonderful read. I actually read each of these books in a day’s time, they just flew by it seemed. In Magic Bleeds, Curran doesn’t seem to play as strong as a role and his relationship with Kate feels different but that might be because it's pretty solid right now. Kate is trying to find her nitch in the world without the Pack’s help. She is smart, feisty and learning to compromise in a relationship. There is no denying though that Curran is Kate’s rock and he balances her out masterfully. What I really liked about this fifth book is the further development of Kate’s past and the revealing of heart-breaking secrets from it. And though the series center’s on Kate Daniels each character has their own story and comes to life on the pages, no matter whether they are the main characters or the secondary ones, even the characters who are just around for this novel pop out at you.

The entire series is action-packed; there is no doubt about it. If you like your books fast paced and gripping then I recommend you picking up the Kate Daniels series. It is a solid urban fantasy with just a touch of romance in these last two novels and I hope to see that continue on which with Curran, shouldn’t be a question now! ;) I’m really glad that I finally picked them up and am eagerly anticipating Andrea’s (Kate’s best friend) own novel, Gunmetal Magic, releasing July 31st. I’ve fallen in love with her character and would like to see her finally get a HEA. And of course I can’t wait for book six in the Kate Daniels series, after all, I need my Curran fix! How am I ever going to be able to wait until NEXT February though? *groan*