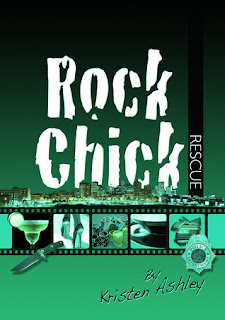 
Jet McAlister has a secret. Eddie Chavez has the hots for Jet (not to mention Eddie’s just plain hot). Jet has too many problems to realize that Eddie’s interested. Eddie loses patience when Jet ends her waitressing shift at a strip club with a knife at her throat. Since Eddie’s a cop, he figures he can help. Since Jet’s used to solving everyone’s problems she doesn’t want Eddie’s help.
Throw in a Dolly Parton look-alike, a gruff but lovable strip club owner, Jet’s ne’er do well father, his ne’er do well friend, Bear, Bear’s long-suffering, chain-smoking wife Lavonne and the crew from Rock Chick and you’ve got Rock Chick Rescue.
Rock Chick Rescue takes you on a wild ride with Jet, Eddie and the gang as they wrestle bad guys in a bagel shop, hit Denver’s backstreet poker tables (with big hair), and help the strippers at Smithie’s take down a would-be murderer.
Through this, Jet’s got to learn that even when life made you give up your dreams, you can still end up with the (hot) guy. Eddie’s got to rescue Jet from a bad man (so he can do better things with her) and teach her that some dreams can come true.

As much as I love Lee from Rock Chick, and boy do I love that smokin' hot bad-ass, I love Eddie Chavez more. Eddie pushes all of my freakin' buttons in big, BIG ways! He's a smooth operator who's willing to go the extra mile to get the woman he wants. He showcases all the good ways a guy can be possessive without being a complete jerk and he likes to have 'chats'. These chats are usually in a bed where some version of nakedness is involved. I don't know about you girls, but I would LOVE to have an Eddie 'chat'.

The heroine in this book was phenomenal. Jet does what she has to do to take care of her family. It doesn't matter if she's 14 getting a job to help support her mom and sister because her dad left them, or if it's years later when she's a grown woman who's supporting her mother who's still recovering from a stroke. She's working two jobs to take care of her mom, so her personal life is non-existent.

She's got a huge crush on Eddie, but won't utter a word about it. Even if she did have time to indulge in a relationship, which she doesn't, she thinks Eddie is way too hot for a plain girl like her. Jet is totally delusional though because she's not plain, and she's completely missing every signal Eddie throws at her that he's interested. After a misunderstanding at a get-together, Eddie comes to think that Jet is racist. When Indy and Ally find out they're ready to kick Jet's butt to the curb of Fortnum's. Jet comes clean about the misunderstanding, and after some meddling from the Rock Chicks and Jet's mother, along with some trouble her estranged father brings to town, Jet finds herself at Eddie's mercy. Can I be at Eddie's mercy? Pretty please?