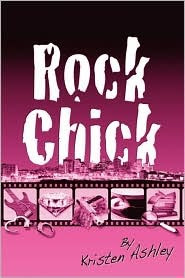 
Indy Savage, cop's daughter, rock chick and used bookstore owner, has been in love with Lee Nightingale, once bad boy, now the man behind Nightingale Investigations, since she was five years old. No matter what ingenious schemes Indy used to capture his attention, Lee never showed an interest and Indy finally gave up. Now Indy's employee, Rosie, has lost a bag of diamonds and bad guys are shooting at him. When Indy gets involved, Lee is forced to help. Complicating matters, Lee has decided he's interested, Indy's decided she's not. But she can't seem to keep Lee out of her life when she's repeatedly stun gunned, kidnapped and there are car bombs exploding (not to mention she's finding dead bodies).
Indy's best bet is to solve the mystery of the diamonds before Lee. Lee's challenge is to keep Indy alive and, at the same time, win back her heart.

Rock Chick is the first book in the Rock Chick series. You don't necessarily need to read them in order, but I highly recommend it.

This is the story of India 'Indy' Savage and Liam 'Lee' Nightingale. Indy is a rock and roll girl, from her long hair to her cowboy boots. She has been in love with Lee since she was 5 years old. Lee is a bad-ass. As everyone knows, Rock Chicks love bad-asses. Unfortunately for Indy, her mother's best friend was Lee's mom Kitty Sue. So after years of throwing herself at him, Lee says the one thing no girl wants to hear, 'you're like a sister to me'. All of her scheming and planning with her best friend Ally, who is Lee's little sister, goes down the drain.

The story starts 10 years after that fateful realization that Lee would screw any girl, but her. The story is set in Denver, and believe me, you feel like you live there with all the great descriptive words.

Being a carefree, outgoing, Rock Chick, Indy has found herself in a situation involving stolen diamonds. She proceeds to get shot at, kidnapped, people disappearing, and the one person who can help keep her safe and alive is Lee. Indy 's mission is to keep her heart from being crushed. Because there is no way bad-ass Lee is looking for anything serious, right?

I could go on and on and give the whole story away, but where is the fun in that! Just know that with characters like Ally, Hank, Todd, Stevie, Coxy, Goon Gary, Pepper Rick, Tex (I love Tex), the Kevster, hot bad-asses saving the day; this is a must read book! Rock Chick sets the stage for the whole series, which is kick-ass!