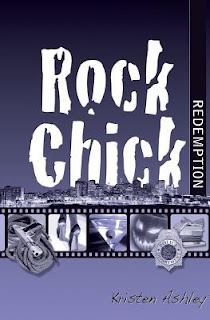 Roxie’s on the run from a bad boyfriend who will not catch the hint that it is o-v-e-r. She’s in no mood for love at first sight, but when her eyes fall on Hank, it’s trouble from the get-go. Roxie tries to hold Hank at arms length but Hank wants to be a closer (as in, a lot closer). Roxie’s trouble catches up with her and Hank wants to help but Roxie knows in her heart that she’s no good for a white hat guy. The problem is no one agrees with her, especially her crazy hippie best friend Annette or her parents; the even crazier small-Indiana-town Herb and Trish. Toss into the mix the gang from Rock Chick and Rock Chick Rescue and Roxie finds herself totally outnumbered.
Climb in for another Rock Chick wild ride through Rock Chick Redemption. As the odds stack up against Roxie, she has no choice but to hold on and just ride it out through the kidnappings, car chases, society parties, a riot at the strip club, Hank getting “Mom Bombed” and one crazy night at the Haunted House.
During all this Hank works at convincing her she really wants to stay and he, along with the Hot Bunch, go all out to make her safe. Hank also needs to work on showing Roxie that her past decisions don’t mean her future can’t include something as downright delicious as… normal.

This is the third book in the Rock Chick series, hopefully you have read the first two stories. Not that you need to read them first, but you are so missing out if you haven't.

This is Hank and Roxie's story. Roxie is trying and has been trying for quite a while to lose her loser boyfriend. She comes up with a scheme that involves going to Denver and meeting her long lost uncle she has been writing to since she was a little girl.

Roxie walks into Fortums right into the Rock Chicks and Hot bunch hanging out, but no Uncle Tex. She checks out the guys, I mean who could blame her, and instantly is drawn to whiskey colored eyes looking right at her. This is around the time that Uncle Tex walks through the door. Roxie has never seen Tex in person since he cut the family out of his life.

If you have been reading the series in order (which you should be!) When I say that Roxie is just as crazy as Tex, you know what I'm talking about. She is high maintenance, designer clothes, but being related to Tex, she's awesome.
Hank falls for her and knows he is going to have her in his bed. Hank puts Lee, and Eddie to shame with how fast he moves.

Now no Rock Chick is a Rock Chick without being kidnapped and stalked, crazy ex's, multiple sets of bad guys, because one is never enough. All of our friends from the first two stories are back, along with some new ones. If you loved the first two stories, you need to read Roxie's and then continue on to the rest of the series.