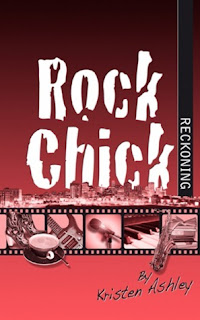 Stella’s the lead singer and lead guitarist of the Blue Moon Gypsies and Stella used to be Mace’s girl. Mace broke up with her though and the loss of him rocked her world. But Stella gets a call, late at night (again) from one of the members of her crazy band. She has to go play clean up (again) and runs into Mace (and a shed load of police) and ends up getting shot.
Mace finds he doesn’t like it much that his ex-girlfriend got shot, right in front of him but it’s worse. A very bad man has thrown down the gauntlet and ALL the Rock Chicks are in the firing line. Stella doesn’t want Mace to be the one to keep her alive but she has no choice… mainly because Mace isn’t giving her one.

Stella Gunn has a voice that can bring men to their knees. Especially Hot Bunch Boy Mace. She's Rock n' Roll personified. Music isn't just a job to her, it's the thing that keeps her going in life. In fact, music is all that she has in this world. Especially since Mace broke off their relationship a year ago and left her brokenhearted. But in a way, she's not surprised Mace didn't stick around. No one else has been able to love her so far in her life, why should he be any different?

What Stella doesn't know, is that Mace did love her. Only he never knew that Stella was in love with him. He thinks that he played a constant second to everything and everyone else in Stella's life. If he had known how she felt, he would have stayed. Being with Stella was the closest Mace had been to peace since the day his life fell apart several years earlier when he lost his younger sister and almost died himself. He thinks their chance at a loving relationship is over until he's at one of her shows with the Rock Chicks during the Rock Chick Revenge book, and Stella goes off her set list to sing Hank William's I'm So Lonesome I Could Cry.
Like a defibrillator to his unbeating heart, Mace knows after that song that Stella had cared for him and he's determined to get her back somehow.

Late one night one of her band members calls her needing help. She heads on over to his place only to find Luke and Mace already there. As she argues with Mace about going into her band member's house, danger appears in the form of bullets. Stella has just been drawn into a warning to all the Hot Bunch Boys and she doesn't like it. She's going to fight Mace tooth and nail to get away from him when he's now so determined to lock her down to his side for her own safety. But does she really stand a chance against a Hot Bunch Boy? Mace's back-story is very emotional and Stella's story will also touch many readers. Like all the other Rock Chick books, this book is a wonderful read that will have you turning the pages late into the night! 4.5 Wine Glass Toast!