August's Wine Club Review of Viper by Patricia A. Rasey 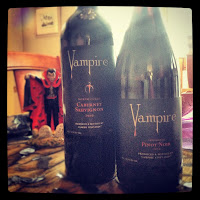 Wine Selection: Vampire Cabernet Sauvignon California 2011 (Because I couldn't help myself with the cliche')
*Full-bodied with Blackberry and Dark Cherry aromas, with just the right amount of Oak flavors leading to a lingering finish. Classic, small-lot fermentations, followed by aging with oak, gives full expression to the rich varietal flavors in this wine.
~A Perfect Complement to Any Fine Meal Shared by Two Mortals at Summer's Twilight~
Paired with: Viper (Sons of Sangue #1) by Patricia A. Rasey

Crystal L: Well Ladies, it was finally my turn to pick a book and we ended up with an Outlaw Motorcycle Club filled with vampires. Viper, first book in the new Sons of Sangue Series, features a different perspective on vampires. Instead of the living dead we have vampires that have heartbeats, walk around in the sun, and avoid tombs, lairs and coffins. What do you two think about books that stray from the traditional vampire myths?

Crystal: I like when authors put a new spin on an old mytho, and I think Patricia A. Rasey did a great job on her vampires. It was a bit True Blood meets Breeds meets SOA. And who can resist a motorcycle riding vampire? Sex-ay!

Lexi: I love it when an author takes a well known myth and gives it a new twist. When you read as many books as we do you need to have something changed up. And really...vampires mixed in with bikers? How can that NOT be good? Hot and hotter!

Crystal L: So we have super hawt vamps like the Sons of Sangue President Kane 'Viper' Tepes and a badge wearing heroine in Detective Cara Brahnam. Thankfully there wasn't any 'insta-love' in this book, and the two characters certainly had chemistry, but I felt there could have been more. For me, it seemed like they went from the healthy 'push/pull' scenario to "I love him/her' without enough of the emotions or conflict that should be prominent in between. What do you two think?

Crystal: I agree. I would have liked to have seen more of an emotional connection between Kane and Cara, they had the physical attraction down pat, but there relationship lacked that core development of feelings between the pair that every relationship should start out with. Especially on Cara's side, who begin the book being frightened and uneasy with Kane.

Lexi: For me it was a little slow for these two. A lot of thinking and some, almost! No wait...there, no... moments. As big and bad as Kane was I wanted him to take his feelings head on, no vacillating.

Crystal L: Okay, so onto the 'real' question for this book. Anytime I pick up a book with a MC in it, I'm thinking I want to read something that's basically Sons of Anarchy in book form with a whole lot of smexy thrown in. Something like Madeline Sheehan's UnDeniable or Joanne Wylde's Reaper's Property. And while this book did have it's smexy scenes like Viper giving the business to a blond in the bathroom, it wasn't SOA in a book. It was more like hints of the MC life interlaced into the paranormal world. Very interesting concept pulled off pretty well by the author. What did you girls think? Should it have had more SOA type moments if it's based around a paranormal Motorcycle Club?

Crystal: I would have liked to see more of the sex and danger that SOA thrives on in Viper, for an MC the Sons of Sangue were pretty tame. Throw in the vampire aspect and they should have beat out SOA in these departments but didn't. Though I like the premise it didn't fully meet my expectations. Overall though, despite the fact that it took me several chapters to get into, it was an entertaining read and I look forward to the next books in the series, and hopefully we'll see more development in Kane and Cara's relationship in the next books as well.

Lexi: I love Sons of Anarchy! Someone please bring that into book form! Viper had a decent balance, bikers and paranormal. That the author went there gives her some extra points, good combo. I see this as a series with potential, hopefully book two will have a tighter plot and characters that really sink their teeth into us. (hehehe, sink their teeth in)

Crystal L: Hopefully Crystal's right and we'll see Kane and Cara's relationship play out in the next book. Maybe book two will have more smexy too. Something Lexi can sink her teeth into... LOL! 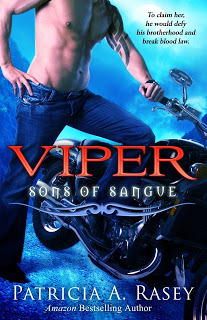 
Kane 'Viper' Tepes is one of the oldest living descendants of Vlad III. Vampirism is in his blood. So is being the President of the Sons of Sangue. Those who break motorcycle club rules that protect their coven are dealt swift punishment. No exceptions. Until one pretty little detective has him compromising his beliefs, and endangering his position as head of the MC.
Vampirism had Cara Brahnam turning tail and leaving behind her life in Pleasant. Now, ten years later, she's back as lead detective and wants to see the person responsible for draining the women of Lane County brought to justice, no matter what deal the gang of miscreants has struck with the sheriff. Or the fact that her number one suspect is the sole reason she fled in the first place.
Now someone has targeted Cara as the next victim and Kane must join in the hunt to find the ancient vampire that wants her dead.