Quick note from Crystal L. before the review: Welcome fellow Rock Chicks! It's time to throw up the devil horns and celebrate the upcoming conclusion to the Great KA's Rock Chick Series! In honor of all the awesomeness that is this series, Fiona and I reviewed a Rock Chick book a day until today and the bittersweet end that is Rock Chick Revolution, Ally and Ren's story. And because I like to think of myself as a book crack extraordinaire pimp, I'm giving away an ebook copy of Rock Chick Revolution! Enter below to win TODAY using the Rafflecopter Giveaway. We hope everyone enjoys Rock Chick Review Week here at Reading Between the Wines Book Club and don't forget that Rock n' Roll Rules peeps! 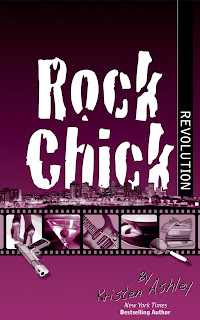 Ally Nightingale has secrets. Secrets she doesn't even share with the Rock Chicks. But two men know what she's up to. One has her back. The other has her heart, but he doesn't know it.
As Ally rewinds the last year of her life, she knows two things. One, she’s never going to get what every Rock Chick should have—her own Hot Bunch guy. And two, she’s a Nightingale through and through. She just isn’t sure what to do about that.
But as her secrets are revealed, the men in her life react. Darius Tucker, a lifelong friend, as usual takes her back. Ren Zano, the man she loves, isn’t quite so sure. The Rock Chicks, Hot Bunch and the entire gang at Fortnum’s weigh in, and a Rock Chick Revolution starts brewing.
It’s up to Ally to control it and prove what she knows down to her bones.
She’s a Rock Chick, she deserves her hot guy and she’s going to keep the one she wants…

The end of the road. Ally Nightingale is THE ROCK CHICK. So it shouldn't surprise anyone that she wants to follow in her Dad and brother's footsteps and be a total bad-ass. She has dreams of being a Private Investigator separate from her brother Lee's operation. It's not something she jumps into though. It's a slow build up starting from Indy's ordeal and not really coming into a secret type of fruition until some time during Ava's issues.

The other thing that comes along during Ava's problems is Ren Zano. The night Ren and Luke duke it  out in the bar parking lot over the luscious Ava is the first time Ally claps eyes on Ren. At first, she's just concerned with helping Ava stop the fight between him and Luke. But later, they end up at a bar getting to know each other. Which leads them to going to Ren's house to really get to know each other. Ally knows by the end of the night that Ren is the one for her. She's flippin' elated to get her happily ever Rock Chick after... until Ren mutters something in his sleep that shatters her heart and dreams into a million pieces.

All of that I just described? That's only the first couple of chapters of this book. There's so much packed in that the Great KA was definitely doing her best to give us the absolute BEST ending to the Rock Chick Series that she could give us. There's drama with Ren. Drama with Ally's family. Drama with her work on more than one front. And it wouldn't be a Rock Chick story if there wasn't a threat of some kind against Ally as well. This book HAS IT ALL. Including, the hint of a new future KA series!!! I'm not going to tell you peeps, you'll have to go get the book and read it to find out. But I will say this... I. CAN. NOT. WAIT.

So sad to see this series end, but loved the way it did. Ally and Ren's story was great and a beautiful way to send our favorite Rock Chicks off! 5 Wine Glass Toast farewell to my girls with the hopes that I get to see peeks of them down the road.

With that... I want to leave you on a high note with a song that speaks to me for the Rock Chicks. She may not be Stella Gunn... but Lzzy Hale from Halestorm embodies an ultimate real life Rock Chick. Not to mention her song "Rock Show" is exactly the song I see our Rock Chicks banging their heads to in the front row. (This is one of my favorite songs.) :D


(Needless to say we don't own the rights to this bitchin' song.
They belong to Halestorm. ;D )