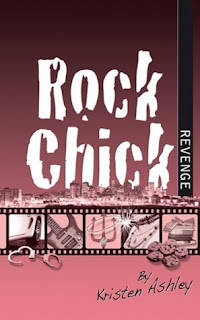 Ava hates men, she has reason and she’s vowed not only never to get involved with another one again but also to exact vengeance on her best friend’s, lying, cheating husband. Since Luke, Ava’s childhood crush, is now a private investigator, she thinks to enlist him but changes her mind at the last second.
Too late, Luke knows she’s up to something and he’s already seen many a Rock Chick try to fight her own battles without the Hot Bunch stepping in. He’s having none of it. She’s having none of him. The clash of the Rock Chick and Hot Guy begins but Luke’s got the advantage. He has handcuffs and he’s not afraid to use them.

Alright Rock Chicks, we are now on to book number five! Hopefully you have been reading along, if not go buy the first four now!

This is Ava and Luke's story. I love them both, separate and together. Luke moved across the street when Ava was 8 and he was 12, and she has loved him since. Growing up, Ava was teased, being called fatty fatty four eyes. Luke was always nice to her, and they had a special friendship. After Luke's father's funeral, Ava over heard her nasty sisters talking about how it was so gross to see Luke hug her fat rolls. These girls are bitches and have always been nasty to their sister. But this comment gave Ava the push to drop the extra weight. She has always been a Rock Chick, has been friends with Ally and Indy for years. Now she is a knockout on top of it.

After the Liar, the Perv, and the Thief, Ava has sworn a vow to her vibrators. Sissy, Ava's best friend since forever, is married to a dawg. When he tries to kiss Ava, it's the last straw. The girls come up with a plan to get the dirt on Dom, so Sissy can divorce his ass. Enter Luke. Luke works for Nightingale Investigation. So Ava decides to get Luke to help them. When she shows up, he doesn't even recognize her. Highlights, contacts, and a lot of weight gone, will do that to you. Luke is pissed that Ava never returned his calls after the funeral. And being the great communicator that his is, carries her ass off to yell at her! Needless to say, that pisses Ava off, and she decides she will get the dirt on Dom herself.

Luke decides that he is going to help her anyways. And Luke's way of keeping you safe involves, handcuffing you to him and kissing you to shut you up. A girl could get used to that! In the process of trying to help Sissy, Ava finds herself in houses that are shot up, kidnapped (a lot) car chases, violated, men coming out of the woodwork trying to be with her, Luke deciding that they are together, a crazy mother and sisters, super mom Stark, tasers (weapon of choice) and Smithie in a tree!

Anyways, I can go on and on about this book, but bottom line is, you need to read it!!