Today we have an excerpt to share with you from Tara Maya's latest release in The Unfinished Song series, Wing. Make sure to enter the giveaway at the end for your own copy and to get the first book in the series FREE! 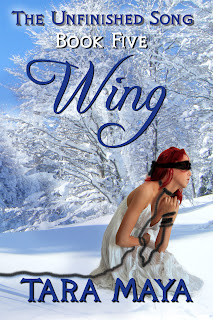 
UMBRAL SERVES THE DEATHSWORN. He exists for one purpose only: to hunt down the last girlwith rainbow magic and kill her. Now he has Dindi at his mercy. But he discoverers that the RaptorRiders of Orange Canyon have played with dark magic that threatens all Faeath, and he needs Dindi’shelp to stop them.DINDI BARGINS FOR HER LIFE. She offers to help her captor rescue the White Lady from theRaptor Riders, who plan to use the faery as a pawn in a monstrous scheme. But Dindi will neverforget that Umbral murdered someone she loved…and never forgive. She vows to escape and bringhim to justice.A DARKNESS UNCOILS IN ORANGE CANYON. If they can’t work together, the darkness willconsume everything.


Excerpt from Wing from the character Vessia's perspective

Vessia’s captors, Vumo (her husband’s brother) and Amdra (her niece), had
put a sack over her head and tied her to a horse. At first she was so furious, she
just wanted to hurt Vumo. It was hard to bite through the sack, and her hands
and feet were tied together, but she did get in some elbow action. It pleased her
to hear Vumo grunt in pain. He never retaliated, only held her firmly, stomach
down, over the horse in front of him while she thrashed trying to fling herself off.
His horse plodded at a leisurely pace, equally indifferent to Vessia’s efforts.
“Can’t you ride any faster?” Amdra’s piercing voice could be heard clearly
through the wool sack.
“She’s making it difficult.”
Not difficult enough. Vessia would never escape this way. Even if she could
wriggle off the horse, perhaps breaking her ankle in the fall, or worse, what then?
She couldn’t untie herself. She’d roll or crawl for a few scoots at most before they
scooped her up again. Wasted fury was no escape plan.
She stopped wiggling. Hopefully, Vumo would think she was exhausted
already because she was old and weak and unable to fight as well as she used to.
That shouldn’t be too much of a stretch to believe since she was exhausted, old,
weak and unable to fight as well as she used to.
For now, she must be docile. Lull their suspicions.
So far, she had only one thing in her favor, which was that they were riding
horses instead of Amdra’s raptor, Hawk. If they had been flying, the journey
would have taken only a day or two. Overland, it would take a full turn of
moon. If they had to cross the Boglands, it could take two moons. The longer
the journey, the more chances Vessia had to escape before they took her to the
Orange Canyon tribehold.
She knew who waited for her there. Once back in his power, she would never
escape.
At first she had no idea why Hawk was gone, or how soon he would be back,
but listening to their terse conversations, she learned that he had been captured
alive by the Green Woods tribe.
Vessia had an idea how she could turn that to her advantage.


WELCOME TO FAEARTH…where humans are trapped between the immortal fae and the minions of
Death. But one woman and the warrior who loves her will defy every taboo to protect their people.
This is the fifth book in The Unfinished Song epic fantasy series. Haven’t read the other books yet?

Come taste the world of Faearth... The first book is available right now for FREE. To find out more about this series and it's books, visit HERE.


Tara Maya has lived in Africa, Europe and Asia. She’s pounded sorghum with mortar and pestle in alittle clay village where the jungle meets the desert, meditated in a Buddhist monastery in theHimalayas and sailed the Volga River to a secret city that was once the heart of the Soviet spaceprogram. This first-hand experience, as well as research into the strange and piquant histories of lostcivilizations, inspires her writing. Her terrible housekeeping, however, is entirely the fault of pixies.


~*GIVEAWAY*~
Tara is offering a digital copy of Wing from Smashwords to give away to one reader. To enter, just fill out the Rafflecopter below. Additional entries are available but not required. Good luck.