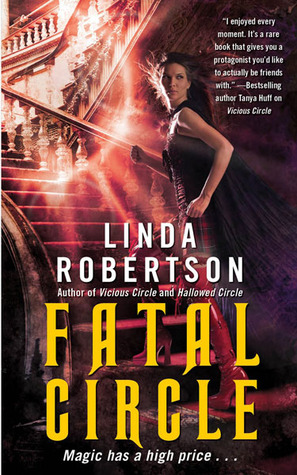 
Destiny sucks. . . .
There was a time when Persephone Alcmedi thought her life was hard to manage, what with wondering how to make sure she took adequate care of both her grandmother and her foster daughter, Beverley, whether she'd end up in the unwanted position of high priestess of a coven, and whether her werewolf lover, Johnny, would resist the groupies who hang around his band Lycanthropia.
But that was before the fairies started demanding that Seph's frightening, unpredictable ally - the ancient vampire Menessos - be destroyed . . . or the world will suffer. Seph and Menessos are magically bonded, but that's a secret she dares not reveal to her fellow witches lest they be forced to reject her and forbid her use of magic. And, despite the strain this casts on her relationship with Johnny, as a showdown with the fairies nears, she and Menessos badly need the werewolves as allies.
Life, death, and love are all on the line, but when destiny is calling, it doesn't help to turn away. With the individual threads of their fates twisted inextricably together, can Seph, Johnny, and Menessos keep the world safe from fairy vengeance?

As if the witches, vampires, and weres were not enough to try balance, the fairies have to declare war. What a great combination for this urban fantasy series, Fatal Circle is a great continuation for the Persephone Alcmedi series.
Seph, Johnny, and Menessos are in middle of a whole heap of trouble. The fairies are on a rampage, demanding Menessos be turned over to them. Seph (who claims she has no deep feelings for the vampire) can’t seem to give him up. Johnny is being pulled deeper and deeper into his role of the Domn Lup, which seems to be pulling him further and further away from Seph.

Emotional strain, strong magic, and always having to look over her shoulder. Seph has a lot going against her. But she doesn’t give up, she seeks advice from her totem animal and other magic users. The fairies are nothing to sneeze at, especially since the one leading them appears to have gone off the deep end. The action is written very well, it will glue the book to your hands. Once the dust settles Robertson brings in the emotional element...along with some other elements.

This series is amazing! Each book builds perfectly off the previous one. Robertson continues to enrich her characters and introduce new ones. What does she have in store for this trio in book four?

Rating: 4 Wines! Who wants some more Seph, Johnny, and Menessos?!
Four days until the release of book 6, Shattered Circle!