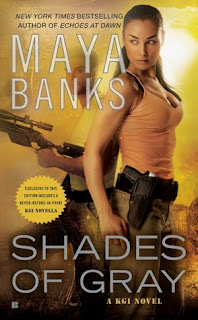 
P.J. and Cole were sharpshooting rivals on the same KGI team and enjoyed a spirited, uncomplicated camaraderie. Until the night they gave in to their desires and suddenly took their relationship one step further. In the aftermath of their one night stand, they’re called up on a mission that goes terribly wrong, and P.J. walks away from KGI, determined not to drag her teammates into the murky shadows she’s poised to delve into.

Six months later, Cole hasn’t given up his search for P.J., and he’s determined to bring her back home where she belongs. Bent on vengeance, P.J. is on a mission that will plunge her into a serpentine game of payback and make her question everything she’s ever believed in. Cole—and the rest of their team—refuse to let her go it alone. Even if it means sacrificing their loyalty to KGI and their very lives…

Crystal L's Thoughts:
I don't usually do a review with spoilers in it, but this one might have a few, so if you don't like them, look away.

What is it with me reading books that reviewers find so controversial lately? The biggest one before I read this one that comes to mind is Karen Marie Moning's recent Fever Series release, Iced. Although Banks Shades of Gray is turning out to be upsetting to reviewers for other reasons than Iced, I am once again baffled as to why. This book features the KGI Series beloved P.J. and Cole. These two characters have had quite a bit of tension between them for, well since the beginning of the series. So when I saw it was their book finally, I damn near did a cartwheel.

The synopsis of the book is that P.J. and Cole finally have their wicked night between the sheets, only to be called in for a mission the next day. When they go out on said mission, something horrible happens that causes P.J. to go rogue, leaving KGI, for a vigilante mission. What happens to P.J. that she would leave her beloved job, and the men that are the closest thing to family to her? Well, here's where I get spoilery. I will give the vague omission that P.J. suffers a viscous attack, receives grievous wounds from it physically, and obtains alarming psychological problems from it, as well.

So let's get down to the nitty gritty. I'm not saying ALL reviewers opinions have been controversial, but there have been a few that put down the book how P.J.'s attack happens, and P.J.'s actions after the attack. Not to get to personal here people, but I'm a victim of an attack, for which I will not elaborate on. BUT, I often have a hard time reading books featuring attacks because I often find a character's thoughts or actions unrealistic after they've endured their circumstances. In this book, I found P.J.'s mentality pretty on par with what an attack victim goes through. And although all of the victims of the world DO NOT get to go on a vigilante spree chasing down those that hurt them, we sure as hell wish that we could. I was also extremely pleased with how Maya Banks handled the romance aspect between Cole and P.J. after the attack. Once again, pretty on par with a victim's mind frame, and the kind of actions that an honorable man would take to soothe the woman he loves.

So stepping off my soap box, I'll leave with saying this: I thought the book was very good, however, you should not read it if you have a hard time reading stories that have attack scenes in them. Kudos to Maya Banks for writing a story that had believable elements within the realms of a fictional story. It was a heart wrenching story to swallow, and I'm hoping the next book featuring Steele is not as heavy, but Shades of Gray is still an admirable addition to the series. I give this book five wine glasses in total appreciation of a writer who did her damnedest to combine a realistic victim's mentality within the non-stop action of a very good fictional romance.