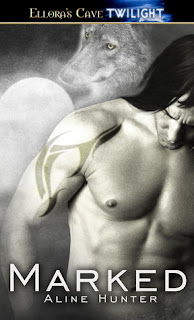 
Fantasy becomes reality if you carry the mark...

Chloe Bryant doesn’t know what to expect when she enters The Wolf’s Den. Drawn to the werewolf tattoo parlor for reasons she can’t explain, she soon discovers the sexy man from her dreams isn’t a figment of her imagination. Not only is Jackson Donovan real, but he explains the dreams they shared are due to their destined mating. It can’t be possible. She’s not a werewolf. Even if he swears the mark on her wrist indicates otherwise.

Jackson is stunned to discover the beautiful minx from his dreams isn’t a full-blooded werewolf but a Halfling. The only way to uncover Chloe’s past is to stake a claim to her future. By taking the delectable female into his bed, he’ll unlock every secret she has to hide -- as well as awaken the passion she’s tucked away for too long -- by exploring her mind, body and soul one sweet inch at a time.

Goodreads
But at Amazon and Barnes & Noble

Oh my... did somebody say tattoos and werewolf? *grins* Sounds like the book for me! I love Aline Hunter (aka J.A. Saare). She's a fab writer. However, I almost flipped my crazy switch when I found out she was starting a new series rather than give me the next book in the Alpha and Omega Series (which I freakin' ADORE). *shakes fist at author* Why do you torture me so! Please give me Trey and my kick ass vampire!

That being said, I liked Marked. Although the book felt a tad bit predictable, I still enjoyed it and am looking forward to the next one. All in all you have a story that features Chloe Bryant. A human with way over protective grandparents and a tattoo on her wrist that is driving her crazy with its tingling and burning. Not to mention, that tattoo gives her beloved grandparents the heebie jeebies for some odd reason. So she decided to head out of the safe human territory, into the supernatural territory, to visit a tattoo shop called The Wolfs Den that she's obsessed with for some odd reason. She goes into the tattoo shop wanting a tattoo to cover up her funky wrist mark, and meets her fate in the tall, delicious, package of an Alpha named Jackson Donovan. Oh, by the way, she's been dreaming some very explicit, naughty dreams of Jackson for quite a while, and she's never met the man once. Jackson then starts trying to convince her she's more than just human... and she's his mate.

Like I said, pretty darn good story, and a nice little set up for the next book in the series featuring Chloe's best friend and Jackson's Beta. I give it a four wine glass toast, and some heavy fist shaking at the author cause I WANT MY TREY AND SADIE STORY! PLEASE! Enjoy everybody!