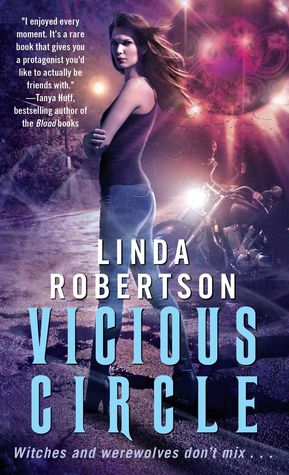 
A girl's got to do what a girl's got to do....Being a witch doesn't pay the bills, but Persephone Alcmedi gets by between reading Tarot cards, writing her syndicated newspaper column, and kenneling werewolves in the basement when the moon is full -- even if witches aren't supposed to mingle with wolves. She really reaches the end of her leash, though, when her grandmother gets kicked out of the nursing home and Seph finds herself in the doghouse about some things she's written. Then her werewolf friend Lorrie is murdered...and the high priestess of an important coven offers Seph big money to destroy the killer, a powerful vampire named Goliath Kline. Seph is a tough girl, but this time she bites off more than she can chew. She needs a little help from her friends -- werewolf friends. One of those friends, Johnny, the motorcycle-riding lead singer for the techno-metal-Goth band Lycanthropia, has a crush on her. And while Seph has always been on edge around this 6'2" leather-clad hunk, she's starting to realize that although their attraction may be dangerous, nothing could be as lethal as the showdown that awaits them.

Goodreads
Available for purchase through: Amazon, Kindle, Barnes & Noble, and The Book Depository

Lexi's Thoughts:
Linda Robertson has it ladies and gentlemen. She has written an urban fantasy with a strong heroine who is not annoying, or constantly fainting, or who knows it all and has it come easy. Persephone, aka Seph, is a witch like no other...only she is just beginning to find that out.
Aside from writing a great lead character Robertson has surrounded our young witch with some powerful allies and enemies. The alpha were that doesn’t bother to hide his attraction to his Red Riding Hood, and the ancient vampire who is Seph’s King Arthur incarnate. You might love them and hate them at the same time, yet each is needed for the balance.

With so much being thrown at her at one time it is amazing that Seph manages to do anything normal, like sit down and have supper or argue with her Nana (how can you not love this cantankerous old lady?!). Lines are being drawn, agendas being hidden, now all she has to do is survive it all.