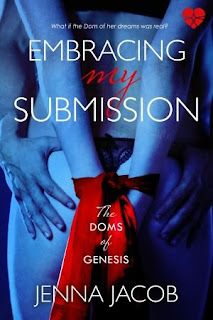 Forced beyond what I could bear, my passion and frustration exploded. I threw in the towel, determined to stop chasing a dream and gave up completely on finding submissive surrender. But fate intervened when two gunshots split the night. Forced to confront my desires and insecurities, I was shocked to realize that my dreams may have held a deeper meaning. Were they compelling me to finally embrace my submission?


Somebody break out the whips and handcuffs, because we've got a new debut author who writes BDSM! Jenna Jacob recently did a collaboration with Shayla Black and Isabella LaPearl, titled One Dom to Love. I LOVED that story. (Note authors that I am impatiently waiting for #2 - just wanted to let you know that) So anyways, when I saw that Jacobs had released her own book, I had to give it a try. I'm glad I did. I went into this book hoping for another Shayla Black or Cherise Sinclair, and what I got was a tad bit different toned story, but still a pretty darn good one. Just a tad paranormal touch to it too, so that was interesting.


In this book we meet Julianna, who is known at the Genesis club as 'Emerald'. Emerald has been dreaming of an angelic looking woman, and the dream man she brings Emerald (who dubbs dream man as Mr. Drool), to her every night for years. Then one day, after an incident involving Emerald and a douche bag of a wannabe Dom at the club, she sees Mr. Drool in the flesh and is floored. The problem with this little realization that her dream man is real? Mr. Drool, aka Mika, has loved and lost a wife to cancer and is in no way trying to replace her. It also doesn't help that Emerald is apparently a spitting image of his dead wife. Ouch.