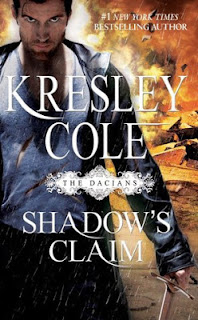 #1 New York Times bestselling author Kresley Cole introduces The Dacians: Realm of Blood and Mist, a new paranormal series following the royal bloodline of Dacia, a vampire kingdom hidden within the Lore of the Immortals After Dark.


Shadow's Claim features Prince Trehan, a ruthless master assassin who will do anything to possess Bettina, his beautiful sorceress mate, even compete for her hand in a blood-sport tournament—to the death.
He won't be denied...
Trehan Daciano, known as the Prince of Shadows, has spent his life serving his people, striking in the night, quietly executing any threat to their realm. The coldly disciplined swordsman has never desired anything for himself—until he beholds Bettina, the sheltered ward of two of the Lore's most fearsome villains.
She's bound to another...
Desperate to earn her guardians' approval after a life-shattering mistake, young Bettina has no choice but to marry whichever suitor prevails—even though she's lost her heart to another. Yet one lethal competitor, a mysterious cloaked swordsman, invades her dreams, tempting her with forbidden pleasure.
A battle for her body and soul...
Even if Trehan can survive the punishing contests to claim her as his wife, the true battle for Bettina's heart is yet to come. And unleashing a millennium's worth of savage need will either frighten his Bride away—or stoke Bettina's own desires to a fever-pitch...


Goodreads
But at Amazon, Kindle, The Book Depository and Barnes & Noble

Kresley Cole does it again! I love this woman, and I love her stories. She's an amazing writer and world builder! With Shadow's Claim she branches off into a new series, featuring the Dacians, but it also ties into her Immortals After Dark Series. We travel to the land of mist and blood, Dacia, to meet some of Lothaire's relatives BEFORE Lothaire takes over the kingdom. One of those relatives is Trehan Daciano, known as the Prince of Shadows, who is the sword of Dacia. He's also in line, like a few other of his kin, for the throne. So there's been lots of killing and blood feuds over who will rule. Trehan is kind of meh about ruling. He's good just to continue being the assassin for Dacia. That is until the day he meets his bride, and she starts his heart again.

Bettina is the heir to a demon realm. She's half demon, and half sorcerei. She's in love with her best friend, who's not in love with her, and now all of a sudden she's stuck as the prize to a ridiculous tournament. The winner of the tournament will win her hand in marriage, and the throne along with her. She doesn't want to be a damn prize. She wants to seduce her best friend, that is until the night she gets drunk and starts making out with a vampire in the dark of her room, because she thinks the vampire is her best friend. The spark of chemistry between herself and the vampire is crazy, and causes her to start second guessing her feelings for her best friend. The problem is, her vampire, Trehan, is sworn to kill her best friend for his crimes against Dacia. Well there's a buzz kill.

I won't say anymore and you can't make me! You HAVE to read this book! It is simply to good to pass up. A five wine glass toast for Shadow's Claim, and now I'm impatiently waiting for the next Immortals After Dark book because it's one of the Lykae! I do love my beasties you know.