Happy Book Birthday to Crazy for Him by Sofia Tate! 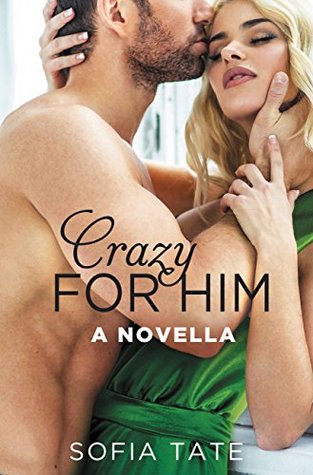 Crazy for Him
by Sofia Tate
Kindle Edition
Expected publication: October 6th 2015 by Forever Yours
ASINB00W22IRK4


Rising star Luciana Gibbons has the voice of an angel, the curves of a woman, and a tragic love life she'd like to forget. After dating more than her share of losers, she's all but given up on men. But when she runs into a gorgeous new singer from Prague-literally colliding against him and his muscles-she may have found the man of her dreams.

Tomas Novotny craves Lucy, body and soul. She is all he's ever wanted . . . and didn't know he needed. But with a past shrouded in despair, he can't risk exposing Lucy to the pain he's endured. Yet in order to give Lucy the life she deserves, Tomas has no choice but to face the past he's ignored for far too long . . .

“Will you hurry up, Lucy? You know how Waltz hates it when we’re late!”
I’m rushing with Alli down the hallway to our Wagner seminar at our grad school, the Gotham Conservatory near Gramercy Park, trying to juggle my coffee travel mug in one hand while checking my phone with the other. I frown at the email that just popped up, shoving the phone into my coat pocket. “Correction. He hates it when I’m late. Everyone loves Allegra. And by the way, you still haven’t told me what happened with Money Boy after I left you in front of Lincoln Center.”
She rolls her eyes at me. “You’re such a drama queen. He only picks on you because your German is flawless and he’s trying to challenge you. And we’ll talk about Davison later.”
I turn to look at her with a knowing grin. “Bet your ass we will. And yes, this is true. My German is-”
Oof!
Without looking where I was going, which I could’ve sworn was down an open hallway, I bump into a wall. But a wall doesn’t grab you by your upper arms, holding them with a vise-like grip.
And a wall doesn’t have a broad chest, solid with muscle.
And a wall really doesn’t have a face with dark brown eyes, an aquiline nose, full lips that smile back at you wickedly, and a mop of dark blonde hair falling across its forehead.
Then The Wall speaks to me in a deep European accent. “Are you all right?”
And that’s when I lose all train of thought.
Alli clears her throat to snap me out of my trance. “Oh, hi, Tomas. We’re just on our way to Waltz’s class.”
“Hallo, Allegra,” The Wall replies to my best friend without taking his eyes from mine, still grinning like a damn fox about to dive into its catch of the day. “Do you speak?” he directs to me.
What an asshole.
That’s it.
“Yeah, I bloody do speak. And you were in my fucking way, so how about you step aside so I can get to class?”
“Are you British?”
I shake my head in confusion. “What?”
“You said ‘bloody. When I learned English back in the Czech Republic, we were taught using British textbooks.”
Oh my God..
Disarmed..
That’s what I am right now. Disarmed. I can’t think, and I’ve lost my ability to speak. And I’ve never been disarmed in my life. I’ve always been in control of myself, my environment, what’s going on around me. I have to be because of my size. At the first slightest sense of discomfort, of any type of mocking or insult, my defenses go up and I wield my shield of armor like the fierce warrior maiden Brünnhilde in Wagner’s Die Walküre, my favorite role to sing.
But with this guy, the steel inside me that I usually arm myself with has melted.  It pours like molten lava out of my brain, leaving me without the ability to speak. The absence of the armor causes me to turn inwardly with my shoulders instead of ramrod straight with my back as it usually does to prepare myself for battle. My brain has turned to mush. Words escape me. And it’s all because of him. This Tomas guy, whose brown eyes appear to have softened as they roam over my body, a slight grin forming at the corner of his mouth. And that accent….I’ve always had a thing for guys with accents, but this one…it doesn’t hint at a man who considers himself a Lothario or ladies’ man, but someone who knows himself, is confident, and doesn’t pretend to be someone he’s not, someone who doesn’t spew bullshit just to get a woman to like him, and, God help me, someone who is genuinely a nice guy.
And then, there’s that chest of his. When I bumped into him, I felt every corded muscle, every hard ab press against my curves. I imagine his nipples to be mere pebbles on top of his well-developed pecs. I envision myself running my mouth over them, teasing him with my tongue as I take them into my mouth and suck on them until I hear him grunt back at me, telling me not to stop in Czech with that smooth accent of his. Holding onto his biceps was akin to clinging onto a pair of rounded boulders inside his flesh. I could barely hang onto them, and yet, I knew I was safe with him because his hold on me was so assured that I knew he wouldn’t have let any harm come to me. I’m disarmed because a man like that has never shown any interest in me. That hasn’t been my experience.