Q&A with Vivian Probst of Death By Roses

Today we have a Q&A with author,  Vivian Probst, to share with you. Enjoy!


1. What inspired you to write Death By Roses?

It had something to do with my older sister’s death from Lou Gehrig’s disease, which had occurred six months before the story began.  I had grown up deeply introverted with an intense fear of death that never relented until I wrote this story.  Somehow, I think my sister’s passing started this story, as if she was telling me to relax, enjoy my life, and not take death so seriously. My older sister had always watched out for me. Perhaps, even now, from her heightened perspective, she knew how to help.

Eugene has a secret problem that has terrified him from the time he was quite young. His parents do not understand—therefore they cannot help. So Eugene has to deal with this problem in the darkness of his bedroom and later in the bathroom after a patient dies.  He lacks any sense of being loved or being lovable.  Gertie changes that for him in ways that surprised and delighted me as I wrote.  He could have turned out to be a criminal; instead, he learned to face his fear with the help of a woman who understood him.

3. Mae Rose dies while sitting on a toilet and causes a lot of embarrassment in Mae Rose’s afterlife. Did you consider Mae Rose dying in any other embarrassing ways?

No.  The story made Mae Rose’s death on the toilet clear from the beginning.  I resisted the idea at first but wrote it as it came to me. I then studied “death on the toilet” on the internet. It happens. I also learned early on to allow the plot and the characters to shape themselves.  It is true that I wrote the story, but the plot and circumstances came to me in ways that did not allow me to alter them in any way.  In the end, I understand why.

I believe that both Art and Mae Rose feel equal amounts of guilt and regret. Mae Rose’s death takes both of them into a new way of seeing what their lives could have been. But it is Mae Rose’s sense of duty to correct this that is strong enough to drive them back to each other. Yes, she tries to fix things on earth in inappropriate ways; she risks and loses Heaven in her effort to restore her relationship with Art.  But Art, in his own way, must also confront his guilt about the affair and suffers severely after Mae Rose dies.

5. Why did you decide to use the VW Beetle as a symbol of Art and Mae Rose’s relationship? What did you like most about the car imagery for their relationship?

Art and Mae Rose had nothing in common when they met so there had to be something else that drew them together.  Mae Rose was reaching a spinster status when she met Art for obvious reasons.  Any man who knew her knew that she would be hell to live with.  Art and Mae Rose did not have a long courtship and their mutual interest in VWs gave them something in common that they thought was love and indeed, eventually changed both of them. 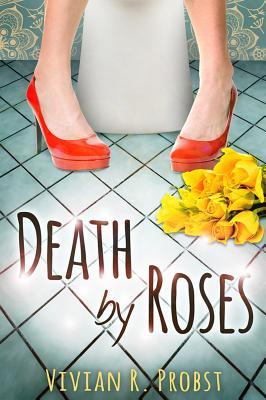 For the first time in nearly thirty years of marriage, Art McElroy Sr. buys his headstrong, disapproving wife a dozen yellow roses. Hours later he discovers her lifeless body seated on the toilet. Mae Rose McElroy's sudden death leaves a void in her family and in the entire Midwestern farming community of Fairview. It's a void Mae Rose will attempt to fill, herself, from the hereafter by meddling directly in earthly affairs.

Mae Rose's meddling leads to her spiritual expulsion from heaven, and she winds up in the body of Mary Lee Broadmoor (Scary Mary), a crusty writer and director of exquisite horror movies. Mary Lee refuses to succumb to stage-4 pancreatic cancer until she gets one final shot at an elusive Oscar. Like Mae Rose, who argues with God for a return to earth, Mary Lee pleads, from her Hollywood deathbed, for more time to complete her work, as her hospice nurse, Gertie Morgan, looks on.

The two women's spirits work together, and Mae Rose provides her host with a new script idea: a love story, based on her life! The script earns Mary Lee her coveted Academy Award, but the movie's release shocks and disturbs Mae Rose's family. They set out to find, and confront, the woman who has somehow co-opted, and publicly revealed, their personal tragedy.

Along the way, new love emerges as the reader meets a caste of crazy, eccentric, but highly memorable characters. "Death by Roses" suggests that relationships don't end at death, but continue until their ultimate purpose is achieved. The universe has every resource at its disposal to get the job done. It also has an amazing sense of humor .