The Eagle Elite are back! Don't miss Phoenix's story, can he find redemption? And look for our 4.5 Wine Glass review on Ember coming shortly! Ember will be 2.99 on release day only! 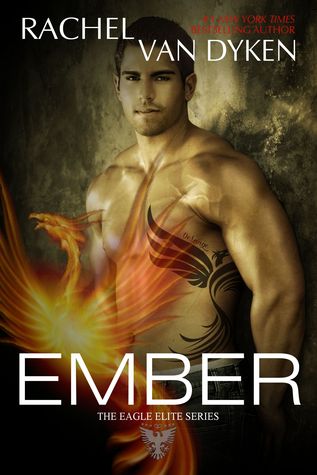 
I am a Killer. A Rapist. A Monster.
I know only pain and survival.
That is until the Cappo's sister walked into my life. And changed everything.

She's a light who makes my darkness darker, her smile makes my heart turn to ice, and I can't escape the fear her seductive looks instill--knowing it's only a matter of time before I fail--again, and take her for myself.
This is the story of my redemption.
But it's not pretty...I died, and now I'm alive, but not living, breathing but not surviving. I am Phoenix De Lange, son to a murdered mob boss, estranged brother, horrible friend, monster in the making, newest leader to one of the most powerful families in the Cosa Nostra.
And I will have my vengeance.
Or die trying.
I am Phoenix De Lange.
Death is all I know.
Until she offers me a piece of life--I can't resist taking.

Once we were on the road, Phoenix chose the correct music for our drive. I say correct because, according to him, one didn't start the day listening to hip-hop or anything remotely fun. No. Mr. Rogers had me listening to classical music.
Classical.
Mozart, to be exact.
Not that I wasn't a fan of the arts, but really? It just seemed so against what you would expect from him. He was the bad boy personified; like, if you put his name in the dictionary, right next to it would be "And mothers warned their daughters to stay away, but the heart wants what the heart wants, and that heart wants that body… bad."
He was all lean muscle and tight abs.
And I could have sworn he had a dimple, but I'd never actually seen it. Phoenix's dimple was like Bigfoot; I'd seen glimpses in pictures and via rumors, but I had never actually seen it for myself.
One day.
One day I'd catch it and take a mental picture or five. Maybe ten. Needless to say, I knew that if I had one of his smiles, it would be a magical thing.
His hands gripped the steering wheel so hard I had a brief moment of panic thinking he was actually going to rip the thing from the dash and have a breakdown. Sad part? I half-expected it. He wasn't acting normal… well, he was always moody, but this morning he seemed downright suicidal.
"So…" I tried to zone out the instruments assaulting my sanity. "You went to Eagle Elite, right?"
He was quiet for a minute then gave a swift nod.
"Wow, don't talk so fast. I almost didn't get all that."
And crickets. Again.
I cleared my throat. "You graduate?"
"Sort of."
"How do you sort of graduate?"
"Did you bring lunch money?" He asked in a tight voice.
I gaped. "Did you just ask me if I brought lunch money?"
He shrugged.
"You're driving me to school, forcing Mozart on my poor sensitive morning ears, and just asked me if I had money for milk."
"I'm concerned about you eating. Sue me."
"Pretty sure the Nicolasi boss can afford to spare me a few dollars for a sandwich and a can of pop."
"No pop."
"Who died and made you my grandpa? Seriously. I want to know so I can steal your gun and point it at them."
"Nobody touches my gun."
"Which one?" I smirked, hoping he'd find the humor in my sexual innuendo, but who was I kidding? It was Phoenix. He simply grunted, rolled his eyes, and kept driving.
In a moment of pure rebellion, I undid the first two buttons of my white, collared shirt.
"What the hell do you think you're doing?" he asked, his voice calm, his eyes still on the road.
"Wow, you really are like a parent. You can see me even when you aren't looking."
"Button that shit to your chin before I pull this car over."
"Put on Jay-Z, and we'll talk."
More cursing.
I undid another button.
"Son of a bitch, you're annoying."
"Is this our first lovers' spat?"
"Were there drugs in your toast?" He finally glanced at me, his blue eyes chilling me to the bone. "Be serious. I don't want to get called into the dean's office because you're high."
"Do I look like I'm on drugs?"

"Is this a trick question?"