Review: Too Dangerous to Desire by Cara Elliott - 4 Wines! 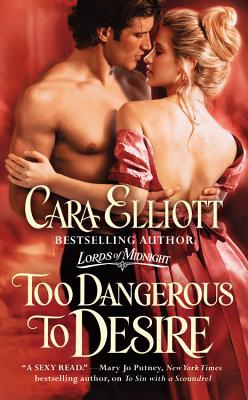 
Can a Flame from the Past be Rekindled? Long ago, Sophie Lawrance chose prudence over passion, rejecting a rebellious young rogue for the sake of her family-no matter the ache it left in her heart. But after a specter from her father's past resurfaces, threatening to destroy all she holds dear, the desperate beauty knows there is only one man whose shadowy skills can save her. Or Is It Too Dangerous to Play with Fire? Cameron Daggett is a man of many secrets . . . and many sins. He's never forgotten the pain of losing Sophie. But now, with a chance to win her back, Cameron sets aside his anger and agrees to help Sophie save her father's honor. Together they embark on a perilous masquerade, leading them to a remote country estate near the sea. There, they must battle a cunning adversary-and their own burning desires. Will they be consumed by the flames? Or can they prove that true love conquers all?

Goodreads
Available for purchase at: Amazon, Barnes & Noble and The Book Depository

Too Dangerous to Desire is one of those historical romances that takes you on a ride. You are pulled into the story immediately, feel the rush of adrenaline as the hero and heroine get each other out of some scrapes, and in the end you are left with a love story that threatens to melt your heart. How can you not root for this pair of young lovers who get a second chance?


The Hellhounds sound like a fearsome group, and they have great names. Cameron is considered one of the Hellhounds, he certainly fits the role of a rake though holds no title. Instead of a fearsome man you, along with Sophie, get to know him instead of his reputation. Cam is a boy at heart, he finds excitement and adventure in everything and he stops at nothing to get what he wants.

Lucky for Sophie what he wants is her. After growing up together and getting into childish mischief they are prepared to take on blackmail and hidden schemes. It is so much fun to see Sophie and Cam as they interact, they have great banter and humor. They feel like a real couple, the kind that have a relationship based on friendship and are going to make it.

As the third installment of the Lords of Midnight Too Dangerous to Desire keeps up the energy and flow of the first books. Though it is written well enough you could read it as a stand alone you do get a little more from the characters and storyline if you read the previous books first. An excellent wrap up for the series.