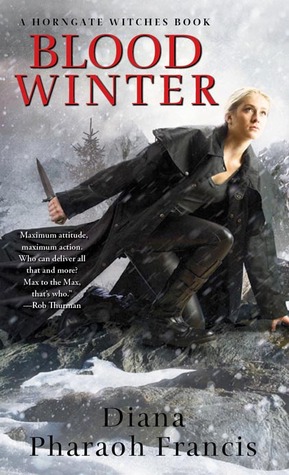 
Set in apocalyptic America and featuring a magically enslaved heroine who is “a riveting mixture of guts, compassion, and furious anger as she struggles with a world coming apart at the seams” (Romantic Times), the fourth in a dynamic dark urban fantasy series unlike anything you’ve ever read before.Winter is coming to Montana and Shadowblade warrior Max is expecting trouble. People are hoarding everything. They are banding together, many flocking to the congregation of Sterling Savage, a fire-and-brimstone preacher. A charismatic cult leader who claims to be the Hand of God, he’s determined to create a human utopia and destroy all magic, starting with witches.
Unbeknownst to him, the “divine” voice he’s been hearing isn’t God but a demon that feeds on hate, death, and destruction. Savage is the perfect puppet for the demon’s ambitions. Max and her people at Horngate are all that stand in its way, and they are woefully unprepared.
Conducting terrible, bloody ceremonies to boost his own power and that of the demon riding him, Savage starts a war between his congregants and two other powerful gangs in the city, fighting for food, fuel, clothing and territory. When he manages to capture Max’s niece, brother, and several teenagers from Horngate, Max tries to free them but finds that Savage has twisted their minds. They worship him—even her brother, who is a witch and whom Savage intends to burn at the stake. Going undercover in the cult compound, Max swiftly realizes just how seductive Savage is. His charisma is reinforced with magic. His followers adore him and will do anything for him. Anything.
But courage, loyalty, and friendship are powerful forces—and Max doesn’t like to lose.

Goodreads
Available for purchase at: Amazon, Kindle, Barnes & Noble, and The Book Depository

Diana Pharaoh Francis continues the apocalyptic Horngate Witches series with her signature non-stop action and magic. Blood Winter brings more than self sacrifice and challenges for Max, winter is coming and it is going to be bloody.


Fast paced, that is what you can expect from a Francis novel. Max is continually surrounded by cataclysmic events. Just when you think there isn’t anything left for her to face (well, besides the old gods waking up and going to war and the forced culling of the human race) there is something new. This time it is in the form of Savage, who seems bad enough as he is but then you find is really controlled by a demon. What is it about the world ending that makes people go crazy and think following people like Savage is a good idea?

The cult leader and connected demon needing to be taken out is a great plot line. If you have read the first three books in the series you have also been following the plot line of Max and Alexander. Each book you get to know Alexander and his emotions more. Max is still a hard nut to crack and it makes you feel for the guy. He has put himself out there over and over yet Max can’t bring herself to take the chance. After the conclusion of Shadow City you were left with the feeling that their relationship will move forward. Blood Winter was a little bit of a disappointment in that aspect. Instead of committing to taking the chance Max continues to freak out, yes there were some interesting twists but it may have been a little too late.

Despite some let downs with book four, the Horngate Witches series continues to be a fun Urban Fantasy series. If you enjoy kick ass heroines taking on witches and magical baddies of end of the world proportions you will enjoy this series.