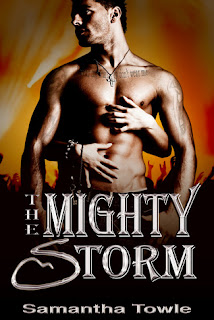 The Mighty Storm
The Storm Series #1
by Samantha Towle

Jake Wethers, sexy, tattooed and deliciously bad lead singer, and brains behind The Mighty Storm, one of biggest bands in the world, left Tru with a broken heart when he moved from England to America with his family when they were both fourteen.

Sent to interview Jake for her music column by the magazine she works for, they are both unprepared for the sparks that fly the instant they reconnect. Only, there’s a complication to their instant feelings for one another – Will, Tru’s boyfriend of two years.

Then Jake makes Tru a job offer she can't refuse - travelling the world with him and his band. But taking the job means leaving Will behind, and being on the road with the band means spending an inordinate amount of time with Jake.

Is Tru strong enough to resist the delectable bad boy who once held her heart so completely, or will she willingly risk it all for one night with the worlds most notorious womanizer?

Heelllllllllloooooooooooooo Jake Wethers, you hot, tattooed, needy Rock God. He's drool worthy ladies, and he's got problems a mile wide that you want to help him solve just so you can curl up with him in bed. But the one woman he wants to help him keep his shit straight is his childhood best friend Tru, whom he stopped talking to when he moved from England to America. Now he's accidentally run into her again when she shows up to do an interview for the magazine she works for. No matter how hard he tries to make that connection with her, she puts him in his place to keep it strictly business. Eventually he talks her around to being his best friend again, but the truth is he wants muchmore than that. He wants her forever. The huge obstacle in his way? Tru's boyfriend.
Tru Bennett had her heart broken when her best friend, whom she was madly in love with, moved away when they were 14 to America, then stopped talking to her. She moved on with her life though. Made it through high school, moved onto Uni, and then out into the real world to get a job and a great boyfriend named Will, all the while watching Jake's crazy success in the Rock world. She thinks she's over all the hurt until she sees Jake again and realizes that she's not. That doesn't stop her from realizing she's missed him like crazy. When Jake talks her into going on the road with the band to do their biography, she is reluctant but goes because of how much Jake wants her too, and because her boss is drooling at the opportunity for the magazine. What happens on tour though is much more than two old friends reconnecting. It's the upheaval of her entire life.
Loved this book! Really, truly, and madly loved it. Great indie read that everyone should pick up. I give it a four wine glass toast and I can't wait for the sequel, Wethering the Storm!