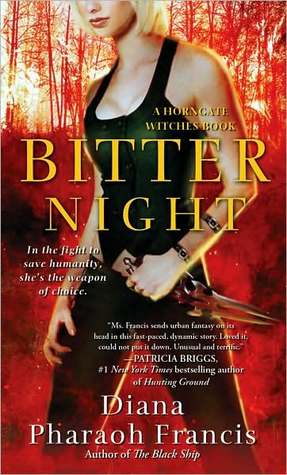 Lexi's Thoughts
When you pick up an Urban Fantasy you expect a strong heroine, a few big scary baddies, and plenty of action. Bitter Night delivers all of that and more.

Bitter Night is an excellent start for this series. Max is one hell of a Shadowblade. Even though she seems like she shows little emotion and doesn’t feel for others, it’s a smoke screen. And one that is about to be blown over.

The wide variety of characters introduced in this first book shows Francis’s wild imagination. She turns angels into death dealers, and powerful witches into pawns. As strong as Max’s character is Francis brings in Alexander who is more than a match for her. He might not strike you immediately as the one she should be paired up with but give him some time and he will grow on you.

This is not to say that this book was written perfectly. There were multiple instances where reading was confusing, no one has eyes in the back of their head...not even in the Horngate Witches series. But the non stop action makes up for the inconsistencies.

Rating: 3.5 Wines! A great kickoff for a series!