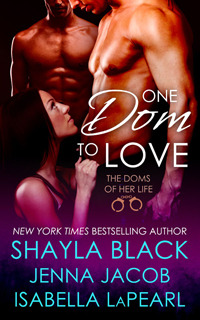 One Dom to Love
The Doms of Her Life #1
by Shayla Black, Jenna Jacob, and Isabella LaPearl
Nook Edition, 257 pages
Published December 4th 2012
Bought by Reviewer

Raine Kendall has been in love with her boss, Macen Hammerman, for years. Determined to make the man notice that she’s a grown woman with desires and needs, she pours out her heart and offers her body to him—only to be crushingly rejected. But when his friend, very single, very sexy Liam O’Neill watches the other Dom refuse to act on his obvious feelings for Raine, he resolves to step in and do whatever it takes to help Hammer find happiness again, even rousing his friend’s possessive instincts by making the girl a proposition too tempting to refuse. But he never imagines that he’ll end up falling for her himself.

Hammer has buried his lust for Raine for years. After rescuing the budding runaway from an alley behind his exclusive BDSM Dungeon, he has come to covet the pretty submissive. But tragedy has taught him that he can never be what she needs. So he watches over her while struggling to keep his distance. Liam’s crafty plan blindsides Hammer, especially when he sees how determined his friend is to possess Raine for his own. Hammer isn’t ready to give the lovely submissive over to any other Dom, but can he heal from his past and fight for her? Or will he lose Raine if she truly gives herself—heart, body, and soul—to Liam?

Hello, can I have two delicious men fighting over me?!? Well, since I can't, at least I can read this book and pretend it's me. Raine Kendall has been in love with Macen Hammerman since he saved her from a life on the streets after she ran away from home. The problem is, Hammer doesn't love her back. She's waited patiently for years for him to see that she's no longer a scared young girl, but instead a grown woman who would love nothing more than to kneel at his feet and call her Master. Hammer refuses to consider it though, and keeps Raine at arm's length, while also keeping all other men away from her too.

See the thing is, Raine has it all wrong. Hammer has loved Raine almost from the moment he took her in off the streets, but at first berated himself because she was nothing but a scared 17 year old girl. Then, as the years went on, Hammer told himself he couldn't allow Raine close, because he didn't want to ruin her life like he ruined his first wife's. She deserved better than Hammer. Someone who was whole and could give her the white picket fence life she deserved. The problem is, he can't stand the thought of anther man near Raine.

Hammer's best friend Liam comes for a visit and is baffled at Hammer's behavior. Why the man would push away a sweet sub like Raine, he can't understand. Not to mention that he can't stand to see how much Hammer is hurting himself and Raine by his refusal to give into the feelings he obviously has for her. So he hatches a plan. He's going to offer to train Raine as a sub, something Hammer has refused to do, to incite his best friend into a jealous rage that will cause him to finally break through those barriers and finally claim Raine as his own. However, what will Liam do when he comes to see that Raine is just what he's been looking for as well?