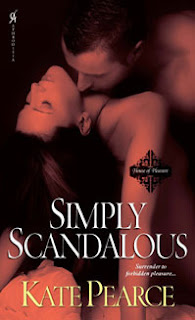 As a former spy, Violet LeNy has mastered the art of deception. But there is no disguising the heated passion that still burns between her and Richard, the man she once betrayed but who now is her only hope of survival. Soon she plans a scandalous game of seduction where sensual surrender is the ultimate pleasure…

Goodreads
Purchase at Amazon, The Book Depository and Barnes & Noble

Richard Ross is a dull man compared to the rest of his Ross-Delornay family. Or at least they think so. The truth is, Richard has been living quite a fascinating life as a part time spy for the crown. A part time job that once was quite active when he was in France ten years ago. Of course, working for the crown wasn't the only thing he was doing in France. No he also fell in love with Violet LeNy, and then she was murdered in front of him. Or at least that's what he thought until he came across a man in his step mother's Pleasure House that had a striking resemblance to his long lost Violet.

Violet LeNy is on the run with her twin brother Jack Lennox. There's someone trying to kill them. The elusive 'Mr. Brown'. So they're on a mission to figure out who Mr. Brown is and stop him once and for all so that they can finally live a peaceful existence, and start over in England, away from their native France. This mission brings old wounds to the surface for Violet though when she has to use the only man she's ever loved, and walked away from to save, to help her find Mr. Brown. The fact that Richard is furious at her deception is an understatement. But will Richard help her, or will he walk away and leave Violet and Jack doomed to the possibility of death at Mr. Brown's hands?

I've read almost the entire series of Ms. Pearce's House of Pleasure Series. I think I've only missed one or two books. While this one wasn't my favorite, it was still a good read, and I found myself enjoying the conclusion of some long time issues for the Ross-Delornay clan. Richard's issues with his father are resolved, and it had a nice back story including the youngest sibling Emily. From what I understand this is the last book of the House of Pleasure Series, and she will be starting a new series called the Sinner's Club with her next book. So it's a four wine glass toast to Simply Scandalous, and let's bring on the next wickedly naughty historical piece from Ms. Pearce shall we? I love this woman's naughty imagination.