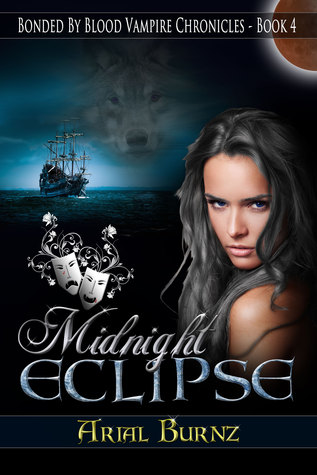 Broderick MacDougal follows the familiar yearning of his soul to a fierce warrior who is as seductive as a siren at sea – and she is just as deadly. The world of the supernatural opens to Broderick as he not only finds himself in the midst of an ancient war of shape shifters, the devious Cordelia Harley has re-entered his life and has a few of her own surprises.

Born into a hated race of Norse werewolves, Celina Hunter knows all too well the dangers of trusting anyone other than her two brothers. And yet the survival of her family hinges on trusting the strangely familiar Broderick MacDougal, a natural enemy of her kind…yet one her tribe’s Shaman advisors confirm is her soul mate. Enemy or not, Celina slips into the spell of this vampire’s promises of eternal love, gambling with all she holds dear.

Broderick and Celina are bound by a curse, but having come this far through the centuries, Broderick is not about to risk his chance at having his soul mate for eternity. The price, however, may be more than Celina is willing to pay as there is more at stake than just her immortal soul.

Don't miss the rest of the Bonded by Blood series!

Arial Burnz has been an avid reader of paranormal and fantasy for over thirty years. With bedtime stories filled with unicorns, hobbits, dragons and elves, she succumbed to crafting her own tales, penning to life the magical creatures roaming her dreams. Having a romantic husband who’s taught her the meaning of true love, she’s helpless to weave romance into her tales. Now she shares them with the world. Arial Burnz lives in Southern California, with her husband (a.k.a. her romance novel hero)—who is also, quite coincidentally, a descendant of Clan MacDougal.

Arial is also giving away a single Grand Prize of…
A $100 Amazon, B&N or iTunes gift card – winner’s choice  A signed set of Books 1-4 of the Bonded By Blood Vampire Chronicles

Winner will be chosen on 11/21/2014. Everyone who participated in any stops on the Midnight Eclipse tours (VIP Club members or not) will be entered for the grand prize drawing. The more you participate, the more chances you have to win. Use the Giveaway Tools buttons below to earn extra chances to win by tweeting, following and liking. For Official Contest Rules, click here.