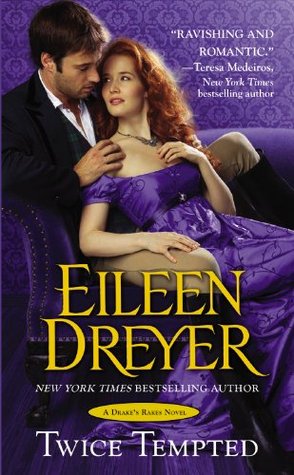 
Fiona Ferguson and her twin sister Mairead are missing. Sisters of an alleged traitor, they have been cast out by their noble grandfather, who believes their brother's reputation will taint them. Furious at the old man's behavior, Drake's Rakes Alex Knight and Chuffy Wilde set out to find the sisters.

What Alex and Chuffy don't know is that they are also leading agents for the traitorous cabal The Lions right to the women. Caught in a deadly game of cat and mouse, the sisters and their rescuers are forced farther and farther into the slums of London to escape not only the Lions, but Minette Ferrar, a notorious assassin looking to revenge herself on Ian Ferguson by killing his sisters. What Fiona Ferguson cannot escape, though, is the dawning realization that she is falling in love with Alex Knight, who is burdened with secrets that pose the most danger of all.


New York Times best-selling author Eileen Dreyer has won five RITA Awards from the Romance Writers of America, which secures her  fourth place in the Romance Writers of America prestigious Hall of Fame. Eileen is an addicted traveler, having sung in some of the best Irish pubs in the world.  Eileen also writes as Kathleen Korbel and has over three million books in print worldwide. Born and raised in Missouri, she lives in St. Louis County with her husband Rick and her two children. http://www.EileenDreyer.com