Release Day Launch: I Saw Her Standing There by Marie Force (#Giveaway) 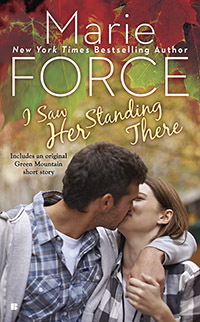 
There’s a budding romance on Butler Mountain, but in the hornets’ nest known as the Abbott family, keeping a secret is no easy feat…

Colton Abbott and Lucy Mulvaney have a secret. Colton’s nosy siblings have begun to put the pieces together, but it’s not like Lucy to keep things from those closest to her—especially her best friend, Cameron, who recently moved to Vermont to live with her true love, Will. But Lucy isn’t about to tell Cam she’s having a fling…with Will’s brother.

Flitting between New York and Vermont is exhausting, so Lucy is looking forward to a long weekend with Colton at the Abbott family lake house in Burlington. Too bad Will and Cameron have the same idea, and once Colton and Lucy are caught red-handed (and red-faced), will their clandestine romance lose its appeal or will their secret beginnings be the start of something lasting?

In the time it took to walk across the small room, Lucy summoned her inner she-cat vixen and prepared to do battle. Unlike the visitor she’d heard Colton talking to outside earlier, this one sounded young. She’d bet there was no lack of women interested in spending some time with her mountain man.
Her mountain man. Where in the hell had that thought come from, and when had she begun to think of him as hers? Probably about five minutes after she met him, if she were being honest with herself.
Realizing she needed to pull out her biggest guns, she tugged the neckline of her dress down to put her considerable cleavage to good use.
She cracked open the door wide enough to poke her head out, but not wide enough that the strikingly gorgeous blonde on Colton’s doorstep could see inside. “May I help you?” Lucy whispered.
Cold brown eyes took a quick assessing look at Lucy and dismissed her as no significant threat. She was used to the instant dismissal as well as the disdainful look. She’d been on the receiving end of it from other women for most of her adult life. “Where’s Colton, and who are you?”
“I’m Lucy, and Colton is under the weather.”
“What does that mean? Under the weather?”
“He’s not well.”
Blondie took a step back. “Oh . . . Who are you again?”
“Lucy.”
“And you’re his . . . his . . . ?”
“Nurse,” Lucy said. “I’m his nurse. I was called in to manage his injury.”
“Injury? What injury?”
“Oh you didn’t hear?” Lucy grimaced dramatically. “The axe caught him. In a bad, bad place. Don’t tell anyone I told you this, but he might not be able to, you know, ever again.”
Blondie’s eyes got all buggy. “Ever?”
“Never,” Lucy said gravely. “It’s as bad as it gets.”
“God, that’s an awful tragedy.”
“Indeed it is. I’ll be happy to tell him you came by, but he’s on some serious painkillers. It might be a while before he’s lucid again.”
“Yeah . . . Um, sure. Tell him Angie was here, and I’m really, really sorry to hear about his . . . um, his injury.”
“I’ll be sure to tell him. It was so good of you to check on him.”
“I’d better go. I wouldn’t want to disturb him.”
“That’s very kind of you. I’m sure he’ll appreciate your consideration.”
Lucy watched Angie run more than walk to her car and smiled with satisfaction when Angie left a cloud of dust in her wake. That, Lucy thought, should take care of that. Pleased with herself and her quick thinking, she shut the door and turned to find Colton standing right behind her.
She let out a shriek of surprise.

Want a SIGNED print copy of I Saw Her Standing There? Order yours today from Marie’s local independent bookstore, Island Books, and she will sign it for you. Order now to make sure you have your book on or around release day. Find out more here.

And don’t forget to grab the previous titles in the Green Mountain Series Today!

With more than 3 million books sold, Marie Force is the New York Times, USA Today and Wall Street Journal bestselling, award-winning author of more than 30 contemporary romances. Her New York Times bestselling self-published McCarthys of Gansett Island Series has sold more than 1 million e-books since Maid for Love was released in 2011. She is also the author of the New York Times bestselling Fatal Series from Harlequin’s Carina Press, as well as the Treading Water Series and numerous stand-alone books. All You Need is Love, book 1 in her new Green Mountain Series from Berkley Sensation, was a New York Times and USA Today bestseller in February. The second book, I Want to Hold Your Hand, will be out in June, and the third book, I Saw Her Standing There, is coming in November. In 2014, Marie will have eight mass-market print releases—the first five Fatal Series books from Harlequin and the first three Green Mountain Series books from Berkley. While her husband was in the Navy, Marie lived in Spain, Maryland and Florida, and she is now settled in her home state of Rhode Island. She is the mother of two teenagers and two feisty dogs, Brandy and Louie.