Happy Book Birthday to ROCK MY BODY! This is the 4th and last installment in Michelle A. Valentine's hot, sexy, and rockin' Black Falcon series. 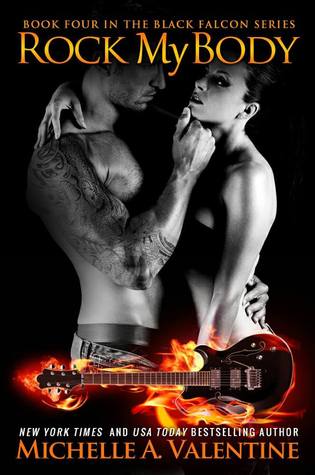 
Tyke Douglas is tired of being the glue that holds the hottest band in the world together. If the rest of the guys are out doing their own thing, then why shouldn’t he? He’s about to turn things up a notch and bring a whole new level of crazy into Black Falcon’s world.

Francine Mead is putting her sordid past behind and is determined to help others overcome their demons along side her. The first step in her new life is taking a job as an addiction counselor, where she can mentor others through their struggles. Francine never expected to be lured back into temptation when her first sexy celebrity client, Tyke Douglas walks through her door. The moment she lays eyes on him, she’s in trouble.

Both Tyke and Francine know a relationship between them would be a disaster, but with each session, things continue to heat up, making it impossible to deny the connection they share. Boundaries cross, attractions heighten and both of their willpowers will be tested to the very limit.

Novel centers around Tyke Douglas, bassist of Black Falcon, and is final book in the series.

Tyke’s lips part slightly as he begins to lean into me. I place my hand against his chest. “We can’t do this,” I whisper.
His gaze locks with mine. “I know.”
I’m not sure if it’s the strain in his deep rumbling voice, or the fact that I’m emotionally vulnerable that makes me momentarily lose my resolve, but something comes over me and my hand against his chest relaxes and I fall into him a bit. Tyke seizes the opportunity and presses his lips to mine, my eyes closing of their own accord, my mouth betraying me by opening and allowing his tongue to slip inside. A low groan emits from the back of his throat as he wraps one arm around the small of my back and pushes his body against mine.
“You taste like sunshine,” he says between kisses.
My knees nearly buckle at his words, and I thread my fingers into his blond hair. This only excites him more. Tyke grabs my waist and hoists me onto my desk, pushing his hips between my legs, his erection straining through the coarse material of his jeans as he rubs against me and his kiss turns hungry.
I could give in right now and escape. His touch feels so good, it’s almost enough to make me forget where we are.
Almost.
I shove my hand into his chest, pushing him backward. “No. We can’t do this. I’ll lose my job.”
Tyke’s lust-laden gaze meets mine as his body stills. I fully expect him to try to convince me that we won’t get caught, but he doesn’t. He simply steps back and straightens his T-shirt while he nods. “I don’t want that to happen, but you can’t blame me for trying. You’re so fucking sexy, and your eyes...God, so damn blue—they’re intoxicating. I think I could stare into them forever. I guess I just couldn’t help myself.”
I bite my lip and stare at him as I hop off the desk. “We have to stay professional. This kind of thing can never happen between us again. No matter how much we both may want it to.”
That earns me a crooked smirk because I’ve just admitted that I want him. “I promise to be on my best behavior from now on, Doc.”
He grabs the notebook I didn’t realize he’d brought with him off my desk and saunters over to the couch. I know I shouldn’t, but I can’t help checking out his ass while his back is to me. That man is something—definitely a lot more suave than I’m used to. And his kiss...dear God. If just his kiss can tempt me to throw caution to the wind and nearly fuck the career I’ve worked so hard for, I can only imagine what sleeping with him would do to me.

Probably destroy me, and ruin me for all other men.