I’m a romance writer, but before that, I was a reader of romance novels and my favorites were historical stories set in medieval times. Genres rise and fall in popularity, but medieval romances, whether knights in shining armor or Highlanders in their tartans, are always there. So I was thrilled to have the chance to put together a collection of stories set in long-ago times in faraway places.

I asked authors to let their fantasies run wild to an era where men wearing heavy armor or thick tartans sent a spirited young maiden’s (or salty widow’s) heart fluttering. To imagine a primitive, simpler time where survival required physical strength, and men were judged for their fierce loyalty and unshakeable honor. To tell the story of that knight serving a conquering king, who enters a keep, his armor tarnished and smeared with dirt and blood, and let the reader watch as he scans the great hall until his gaze snags on a woman whose frightened face is nonetheless set into stubborn lines as she meets his piercing gaze… And then imagine what happens next…

What I received were stories set in Scotland and England, as well as Iceland, Japan, Rome, France and Armenia, with knights, Highlanders, Vikings, Mongols and even a Samurai. There’s certainly a warrior among these tales to suit every taste, and sexy battles of dominance and submission hot enough to make even the most modern woman yearn to be taken by one of these rough, fierce men. 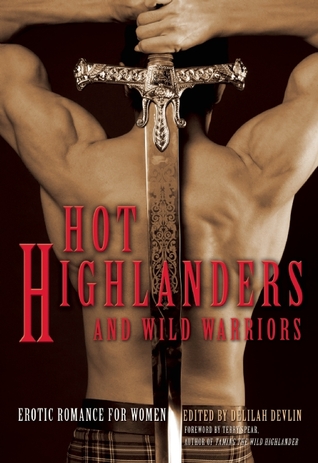 
Men devoting themselves to their true love through the art of courtly love is the ultimate in romance. Hot Highlanders and Wild Warriors is filled with wild knights and Scottish warriors whose courage on the battlefield is outmatched only by their ardor for their ladyloves! Readers will unleash their fantasies of olden days where men wearing heavy armor or thick tartans sent a spirited young maiden’s (or lonely widow’s) heart fluttering. These bravehearts were prized for their physical strength and men were judged for their fierce loyalty and unshakeable honor. Crusaders, highlanders, Normans and Saxons, tournament fighters, vikings, and hunky Huns astride stallions in search of adventure and love all populate the pages of this steamy read.

After a nerve-wracking day that she’d spent supervising meals and finding places inside the bailey and keep for everyone to sleep, she was exhausted. But the moment she’d doused her candle and lain down on her bed, her doubts crowded in.
She would never allow her people to suffer through a long siege. It being May, they were needed in their fields. No, she had perhaps a week before she’d have to concede. She eased open her fists and drew long breaths. Sleep was what she needed. Perhaps in the morning she would hit upon a scheme to delay the inevitable or plead her case to Alred. She rolled onto her side, tucked her hands beneath her face and stared into the dark corners of her room.
Geade wondered about her objection. So did she. Was it only willful pride, tweaked by the fact she had no choice in the matter? It wasn’t as though she didn’t want a man, someday, to share her burdens and her bed. Then she remembered the sight of Grimvarr, so large and fiercely masculine.
Alone, she admitted a moment’s wild excitement. Malcolm had never made her yearn for his embrace. And yet this Viking had somehow crept into her bed. What would it be like to submit to a man like him? One strong enough to subdue her, one who caused more than a flutter of heat to curl inside her womb?
A draft brushed her face. She’d closed the door and latched the pigskin curtain over her narrow window. A scuff of a foot had her stiffening, but she heard no more above the pounding of her heart. She wasn’t alone. “Who’s there?” she whispered.
“I think you know,” came a deep, rumbling drawl.
She drew a deep breath and came up slowly, scooting to the far side of her bed. Her knife was on her chatelaine’s belt hanging from a peg beside the door. She was weaponless. “My people?”
“Your man Geade surrendered as soon as he realized the keep was overrun. No one was harmed.”
“How?”
“Does it matter? I’ve taken this castle. The only question now is one I want answered: Why did you bar the gates?”
Edwina shivered at his graveled voice. “I was promised time to grieve before I accepted another husband.”
“Alred suspected you would grieve until you were old. Did you really think he would defy the king’s order for you?”
She lifted her chin although she knew the gesture couldn’t be seen—not unless Vikings had eyes like cats. “I expected him to honor his promise. I paid for the privilege.”
“About that—he returned the gold. To me.” His footsteps drew nearer her bed. “But that doesn’t answer the question. Why, Edwina?”
Her mouth grew dry at the rasping texture of his deep voice. She swallowed and set her back against the wall. “I wed once for political expediency. This time, I wanted a choice.”
He remained silent for a long moment. “And yet you have turned away every suitor who approached you.”
“None were worthy.”
“You hold yourself in such high esteem?”
“I worried for my people. Warriors don’t make the best farmers.”
His footsteps scraped closer.
She pressed harder against cold stone.
“I will admit, I’ve little experience with farming. But I understood you were competent. That I could rely on you to teach me.”
He said the words slowly, and she tried to read his intentions in the inflections of his voice. Could he be telling her the truth? Would he allow her to continue as steward of her land? “Are we…negotiating?”
After a long moment, he cleared his throat. “You wed young.”
“I had no choice, but Malcolm was malleable and a drunk. We came to an arrangement that suited us both. I managed the estate. He drank and caroused, spending from a generous budget. We were both satisfied.”
“You managed him and the estate.”
“Yes.”
After a pause, he said, “I’m not malleable. Nor will I be managed.”
She heard the steel in his tone. She forced a derisive note into her own. “I was afraid of that. It’s why I closed the gates and prepared for a siege.”
He strode closer. His large shadow was inky black, ominous. “You do realize this is our wedding night? You are already my wife by the king’s decree. Only consummation awaits.”
Alarm rattled through her. “But there must be a wedding. The banns should be read.”
“No, Edwina. Your resistance ends tonight.”


Delilah Devlin is a rising star in the world of erotica and romance. Her titles include Cowboy Lust, Into the Darkness, Seduced by Darkness, Darkness Captured, Down in Texas, and Texas Men. Her short stories have been featured in Zane’s Purple Panties, Girl Crush, Fairy Tale Lust, Lesbian Lust, Carnal Machines, and Passion. A USA Today best-selling author, she lives in Arkadelphia, AR.

GIVEAWAY:
The publisher is giving away one copy of this book to one reader. To enter, just fill out the rafflecopter below. Good luck!