Today we're having a book blast for Exchange of Fire by P.A. DePaul. We'll be revealing a deleted scene from Exchange of Fire and it's on sale right now as well!! Enjoy and make sure you enter P.A.'s giveaway!! 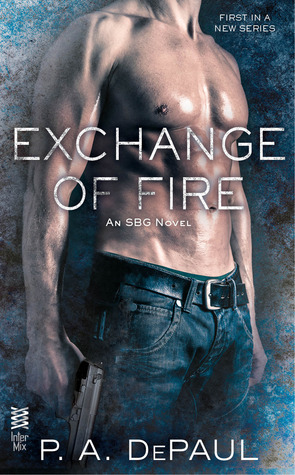 
Sandra Walsh was a deadly sniper for the Sweet Briar Group, a covert agency with assassins for hire, until her last mission went horribly wrong, accidentally killing an innocent girl. Knowing she’s a danger to her team, Sandra goes off the grid, becoming a Shade—an agent declared dead but secretly hiding among the living. She intends to honor her vow never to pull another trigger or have contact with the spy world again. Until she meets Casper Grady…

Grady is a former Marine with a troubled past and a debt to pay. His life mission has gone from protecting the nation to helping local children and their families. The moment he meets Sandra, he knows there’s more to her than meets the eye, but he can’t help but be drawn to the mysterious femme fatale. And when Sandra’s past suddenly catches up to her, Grady is determined to protect her at all costs, no matter how dark and dangerous her secrets are.

As the danger increases, so does their intense attraction. But when they’re forced to choose between each other and the people they’ve sworn to protect, their growing love might not be enough to keep them together—or alive…


Deleted Scene:
Introduction from the author: Exchange of Fire’s gone through quite a few changes since I typed the first draft. Some of them major. This scene was one of the first ones to be changed. As I wrote it, the storyline started shifting to be more about Cappy and his wound then about an assassin coming after Wraith by invading Grady’s home. Not good and too much time was being wasted trying to bring it back on track. As I brainstormed, I realized this scene could be so much more suspenseful and really dive into both Grady and Wraith’s personal storylines if I didn’t include Cappy and shifted Mars outside, trying to pick them off. Ultimately, this one scene developed into multiple chapters of high action and personal suspense (Chapters 39-41 to be exact). Hope you enjoy a peek at an earlier version!

P.A. DePaul is a multi-genre romance author including paranormal fantasy and romantic suspense. She originally hails from Carroll County and Baltimore County, Maryland, but also lived in Macon and Warner Robins, Georgia. She currently resides in a beautiful community just outside Philadelphia. Exchange of Fire is the first novel in the SBG series with the second novel, Shadow of Doubt, releasing April 2015.