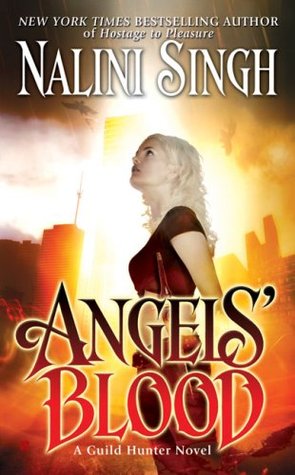 "So, what turns on an archangel?"
"A naked hunter is a good start." He pulled her harder against his cock, holding her in place when she would've wiggled. "My wings," he told her, kissing her neck, finding that sensitive little spot just above her collarbone,
It made her soften, return the favor. "Wings?"
She nipped at the tendons of his neck, feeling languorous heat crawl up her body - she'd thought she wanted a short, hard fuck to screw up her brains enough that she could come down from the adrenaline buzz, but now that she was in his arms, a slow decent into sensual oblivion sounded far better.
When he didn't answer, she decided to do some exploring of her own. Moving one had, she stroked firmly along the top edge of his right wing. He went tense against her, the waiting kind of tense, the kind that told her she'd either done something very good or something very bad. Since he was still pulsing hot and hard under her, she decided to go for good and repeated the act. The time, he shuddered.