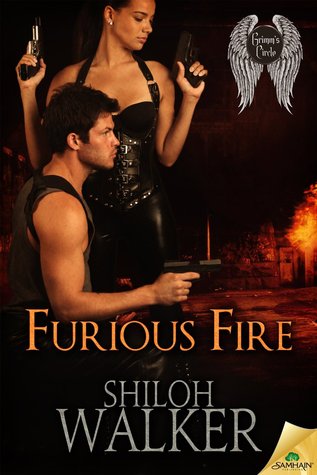 
He is the love of all her lives…

Thomas Finn, troublemaker, gunslinger, guardian angel…loner. More than a hundred and fifty years ago, he was shot in the back then brought back to life just in time to watch a demon masquerading as his best friend kill the love of his life.

Now, as a Grimm, he satisfies his need for vengeance hunting down demons like the ones that took Rebecca from him. His mission: kill as many as he can, then, when the time comes, go down in a blaze of glory. But with each kill, he comes closer to a line no angel should cross.

Her name was Rebecca. Then it was Tilly. Then Ada. Now, Kallypso. She’s lived so many lives, she can’t even remember when or why it started. All she knows is, she’s always searching for a man with golden eyes that make her burn. And when she finds him—as she always does—she knows that spark of joy means she’s only seconds away from death…again.

This time will be no different…unless something breaks the cycle once and for all.

Warning: Contains the Groundhog Day of star-crossed lovers, a pissed-off guardian angel, a demon-hunter with an axe to grind, and the battle to end all battles. Be warned…there’s pain ahead in this book. Oh, and that HEA finally happens. For these two, anyway.

He was just as inhuman now as he had been the last time. Silver-white hair, silver eyes, white clothes. As perfect as if he’d been cut from crystal by a master—and there was no emotion on that hard face.
Nervous, I looked around. Instinctively, my lip curled. We looked like we’d fallen into an art deco nightmare. A very posh one, but it still made my eyeballs gyrate and vibrate inside my skull. Red walls, set with black and white geometric prints. The floor was white. The furniture was black. Everything was vivid and harsh…
Including him.
That man moved a few steps closer to me. He wasn’t quite as painful to look at as everything else in the room so I focused on him. Much easier, I decided, than the prints on that wall. They made my eyes feel like they’d bleed out of their sockets if I stared too long.
Rising from the bed, I looked around, searching for some clue as to where I was. Oddly enough, this interior decorating nightmare didn’t seem to be his idea of comfortable digs. A glance out the window told me one thing—we were still in St. Louis. I’d know that skyline anywhere. Downtown, even. And pretty high up.
Hotel, maybe? I flicked another glance around, decided that was entirely likely. The suite of rooms was pretty large but it didn’t seem to be a condo.
The knife’s grip was sweaty in my palm and my heart was racing harder than I could ever recall. I’d faced some scary shit. It was stupid that this man would terrify me like this.
“Who are you?” I asked. I hated to hear my voice shaking like that. But I couldn’t stop it.
“Nobody you’d know.” He stood, arms crossed over his chest, head cocked.
“That’s why I am asking,” I snapped, even though some part of me was whispering “be nice to the crazy man who can kill you with a blink.”

Get the entire GRIMM series today!