To kick-off our 4th of July event I would like to welcome a wonderful erotic romance author, Tori St. Clare, who also writes fantastic fantasy romance under the name Claire Ashgrove.
Fireworks and Fiction
“Improper use of fireworks may be dangerous, both to the person operating them (risks of burns and wounds) and to bystanders; in addition, they may start fires after landing on flammable material. For this reason, the use of fireworks is generally legally restricted.”
That’s what Wikipedia has to say about fireworks.  If you consider how fireworks evolved, you can parallel romance as well.  Betcha didn’t expect to hear that when you popped into the blog today, huh?
So before you all have a chance to tell me I’m crazy, let’s take a peek. 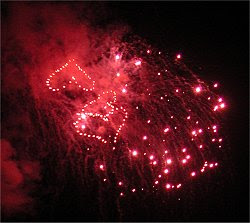 Little Substance, But Wow! What An Effect
Fireworks were believed to originate with the practice of bamboo being placed on fires when kindling ran out.  Because it grows so fast, air gets trapped inside, and when it burns it pops loudly.
In the 50’s when Harlequin grew its roots, none of the books published included intimacy beyond a chaste kiss, although these were considered “explicit”
Oooh, Now We’re Pushing Boundaries
The Chinese discovered that mixing chemicals and putting them inside the bamboo shoots produced a better pop and bang when the bamboo was burned.
Harlequin discovered that the “more explicit” stories sold better and began to focus on books that contained kisses and allusions to sex.  (Still behind closed-doors folks!)
More Please!
Fascinated by the concept of fireworks, Italians developed the ability to contain fire and produce fountain like, ground-effects, that resemble what we know today in back-yard fireworks.  Despite limitations in color (orange and white), a craze began.
In the 80s other publishers jumped to answer the call for more explicit sex scenes.  Virginal heroines were no longer required!  Sex became more common place, although was still alluded to with writing around the subject matter as opposed to specifics. 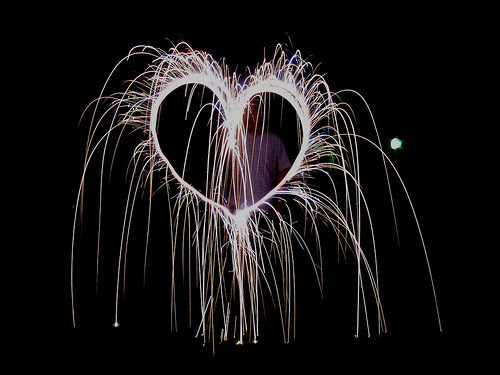 I’m Bored Give Me More
Chemists played with various chemical components and developed the reds, greens, blues and yellows that we see today.  Louder fireworks were developed for large shows to add more impact and awe the crowds more.
Intimacy took on new meaning with the explosion of romance books in the 1990s.  The dominant style was to show sex on the pages in explicit form.  As the decade evolved, demands for more led to the emergence of erotic romance and erotica, making it no longer “taboo”.
Light Me Up!
Today, fireworks are everywhere.  You can pick them up in tents, you can buy them year-round, and depending on where you live, fire them year-round.  The back-yard enthusiast can come pretty close to creating a professional show.  The challenge is to produce larger, more brilliant, explosions that will wow the viewers even more.
Today, sex in romance is commonplace, and rare is the book that closes the doors on intimacy between hero and heroine.  Erotic romance is commonplace, and we even see wide distribution of GLBT romances.  The scenes themselves are often no holds barred, and hot enough to light up the darkest of rooms. – Fireworks between the couple, to say the least.
See?  I’m not crazy.  Romance and Fireworks go together!
And, I’m going to share my own fireworks with an excerpt from my upcoming book, Lie To Me.  It releases on July 3rd, and I hope you’ll check it out!
For the fun of it, I’d like to hear about the first firecracker romance novel that you read that made you sit up a little straighter, or made you squirm.
Thanks for having me here today – and Happy 4th to all of you!
Tori Claire
www.toristclaire.com
www.claireashgrove.com
EXCERPT:
He swallowed down the sound, and his kiss took on more languor, aggressive demands ebbing into a gentle play until his mouth left hers altogether and he lifted his head. His lustful gaze scorched into her. The hard fall of his breath stirred the fine blonde hairs on her forehead. He pressed his cheek to hers, grazed her sensitive skin with the coarse stubble along his jaw.
The pleasant friction sent another bout of delightful shivers surging through Sasha’s body. She dropped one hand to his waist, plucked his shirt free, and slipped her fingers beneath to explore his warm flesh.
“Ah, Sasha,” he murmured against her temple. “Tell me you don’t hate me.”
Her hand stilled at the base of his spine. Hate him. How could she explain that feeling had never once struck? If she confessed to the truth, she’d look weak, sound like a fool. She should hate him. And yet . . . she didn’t. After everything, even after all he’d done to destroy her life, she could not hate Alexei. Turning her head, she met his gaze. “Alexei, I—”
He closed his eyes, but not before he could shutter away a flash of anguish in those green depths. “Lie to me, princess. I need to believe.”
It was a plea he hadn’t needed to utter. She lifted up into him and caught his lips with hers. “I don’t hate you,” she whispered against his mouth.
A low snarl rumbled in the back of his throat a second before his mouth crashed into hers and claimed her savagely. His hands speared into her hair, holding her head in place, imprisoning her to the fierceness of his desperate kiss. She met the stroke of his tongue eagerly, tugged on the hem of his shirt, pushing it up, exposing his abdomen, equally desperate to feel the warmth of his skin against hers.
When that moment of blissful contact came, Sasha let out a plaintive mewl. Blessed torture. Perfect.
Nowhere near enough. She hooked an ankle around his calf and levered her hips into his, stroking herself against his hardened cock.
Alexei tore his mouth away with effort. “Easy, princess,” he rasped. Bracing his hands on both sides of her shoulders, he lifted his upper body away from hers. The faintest hint of a smile touched the corners of his mouth. “Don’t ruin me for the race. I’m already halfway to the finish.” The faint smile disappeared as he lowered his head and grazed his teeth along the delicate shell of her ear. “I want to be inside you when I come,” he whispered. The tip of his tongue flicked against her earlobe. “I want you to come around me. I need that. Can you give it to me, princess?”

A man of action…After helping to break up a Russian human trafficking ring as part of the CIA’s elite Black Opal team, Alexei Nikanova’s newest assignment is to rescue one of the stolen women and return her to her father. When he arrives in Dubai, he discovers his target is Sasha Zablosky—a woman he knows all too well, and who has haunted him ever since their unforgettable time together in Moscow, two and a half years earlier. But he finds Sasha reluctant to leave her sheikh, the only true friend she’s ever known. Only Alexei can’t give her a choice.
A woman of deception…With their yearning roused by intrigue, Alexei and Sasha can no longer resist temptation, and spend night after night in forbidden pleasure. Soon Alexei finds himself falling for her, even as he battles a shadowy menace to protect her. But Sasha is no innocent. She has a past darker than she could ever admit, one that Alexei could never forgive. And it is about to explode into her life once more. As the lies they tell themselves—and each other—pull them deeper into a perilous desire, what began as simple passion becomes a love certain to destroy them and end the lives of countless innocents.

National Bestselling author Tori St. Claire grew up writing. Hobby quickly turned into passion, and when she discovered the world of romance as a teen, poems and short stories gave way to full length novels with sexy heroes and heroines waiting to be swept off their feet. She wrote her first romance novel at seventeen.
While that manuscript gathered dust-bunnies beneath the bed, she went on to establish herself as a contemporary, historical, and paranormal author under the pen name, Claire Ashgrove. Her writing, however, skirted a fine line between hot and steamy, and motivated by authors she admired, she pushed her boundaries and made the leap into erotica, using the darker side of human nature and on-the-edge suspense to drive grittier, sexier, stories.
Her erotic romantic suspense novels are searingly sensual experiences that unite passion with true emotion, and the all-consuming tie that binds -- love.

~*GIVEAWAY DETAILS*~
Tori will be giving away a $25.00 Amazon Gift Card to one random commenter during the month of July.  Two additional commenters will receive a basket of swag.  Follow the tour – the more times you comment the better your chances of winning!  Complete tour dates can be found HERE.
Posted by Crystal @ RBtWBC at 7/02/2012 06:00:00 AM