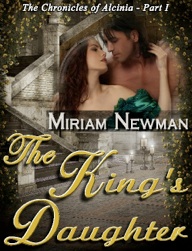 
Born to a dying queen and an ambitious king, Tarabenthia is heir to the crown of Alcinia. Yet when the idyll of her childhood ends she will defy her father, tipping the balance in a world poised on the brink of destruction and leaving history to judge whether she is heroine or harlot.In a time of war, what would you surrender in the name of love?
I was the King's daughter once, so many years ago that sometimes now it is hard to remember. Before the tide of time carried away so many things, so many people, it was worth something to be the daughter of a King.Our little island nation of Alcinia was not rich, except for tin mines honeycombing the south. It wasn't even hospitable. Summer was a brief affair and fall was only a short time of muted colors on the northernmost coast where my father sat his throne at the ancient Keep of Landsfel. Winter was the killing time and spring was hardly better, with frosts that could last into Fifth-Month. But from the south, where men cut thatch in a pattern like the bones of fish, to the north where rock roses spilled down cliffs to the sea, it was my own.One thinks such things will never change, yet all things do.

Purchase at Amazon and Smashwords

A tale of countries being overtaken, its people decimated and sold as slaves, and their Princess taken never to return. Fate has other plans for her, placing her with the one man who can return her to her birthright and offer the chance at love.
The King’s Daughter follows Tia as she witnesses the horror of war and is sold into slavery. She doesn’t stay that way for long, the General rescues her and believes her when she reveals that she is the King’s daughter. Offering his protection and his home is exactly what Tia needs, yet she can’t stop herself from also asking for his bed. Tia and the General are a strong match and it is shown in their children who will undoubtedly have epic tales of their own.

This book may take a while to get into, there are a few inconsistencies in the telling. And an odd mix of period appropriate speech mixed with contemporary phrases. All of that does detract a little from Tia, but the rest of the story line is very solid and enjoyable. The ending is emotional and will leave you wondering how the rest of Tia's story plays out. Heart of the Earth is part two in the Chronicles of Alcinia, it will be interesting to see how the story progresses, the author's voice matures, and if it is a bit easier to read.