Today I would like to welcome historical romance author, Mia Marlowe, who is joining us today with her new release of Lord of Fire and Ice!
Thanks for having me here at Reading Between the Wines to share a little about my newest release LORD OF FIRE AND ICE. It’s the story of Brandr and Katla, a viking warrior and the woman who claimed him as her slave.
I always love to write alpha heroes, but that means my heroines have to be strong women who are more than their equal. Katla is a widow who runs a prosperous steading that supports around 30 souls. She must constantly fight to keep hunger and cold from her people, to protect and lead them. She reminds me of a single mom, who’s constantly juggling so many responsibilities she doesn’t have time for herself.
I love this scene because it gives the readers a peek into Katla’s deepest desires, the ones she won’t let herself recognize she has. She’s presiding over the night meal in the long house with all her people when the piper plays a tune that reaches into her chest and forces her to confront her needs. Hope you enjoy it! 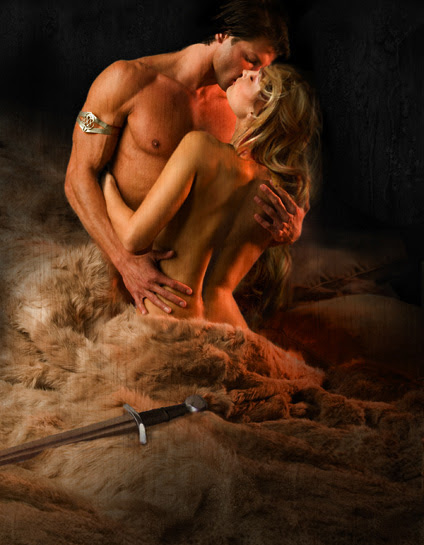 The yearning tune called I Dreamed a Dream curled from the pipe, the tone pure and sweet, wrapped about with breath. The wistfulness of the song stole around Katla’s heart and squeezed.
She, too, had dreamed a dream.
She longed for children and a man to help her raise them. Someone to bear half her load. To be desired for herself alone, not for her land or any other gain.
She ached for love, not just for a joining. She wanted someone to steal her breath away. She yearned for it, straining like the bittersweet melody, stretched almost to the breaking point.
The song went on and on, plucking at Katla’s soul, piercing her weakest point. A tear trembled on her lashes. She swiped it away angrily before anyone could see.
At this point in her life, she’d expected to have so much more. Someone to love her despite her faults, someone whose soul fitted neatly with the bends and crooks in hers.
How could the unknown creator of this tune possibly know the despair she felt?
By the time the song reached its end, Katla had to cover her mouth to keep from sobbing. There was suddenly not enough air in the great hall. While the rest of the company pounded their approval, Katla rose and fled to her chamber.
Not bothering to light her lamp, she threw herself on the bed and buried her face in the linens, where it was safe to give vent to her grief. She wept into the feather tick as she hadn’t wept at her husband’s graveside.
She’d never know the mighty passion. Never hear her beloved’s voice whispering a secret language only the two of them shared. No one would ever want her merely for herself.
The death of a dream was even harder to bear than the loss of a husband. She drenched the Frankish linens with her tears.
The latch of the heavy door clicked, but she didn’t look up. She knew who it was. No one else would be so bold as to enter her chamber without permission.
Lamplight flickered to life, sending his long shadow wavering against the back wall.
“What do you want, Brandr?”
“You.”
Katla swiped her eyes with her forearm and sat up. She blew her nose loudly into a small square of cloth and crumpled it in her hand. Then she turned to face him. He looked at her with an intensity that should have scared her. Instead, it made her breath catch.
“I won’t free you simply because you bed me,” she warned.
“I’m not asking to be freed,” he said, his voice husky with desire. “But I do intend to bed you.”

His Duty is to Fulfill Her Every Desire...Brandr the Far–Traveled has seen the world and a good many of the beautiful women in it. His bed skills are the stuff of steamy legend, his sword sings death, and he can call up fire from thin air. No one in a hundred years ever thought he could be enslaved through trickery and forced to wear the iron collar of a thrall—least of all him.

Until All She Desires is Him...Katla the Black isn't just called so for her dark, silky hair. His new mistress has a temper as fierce as a warrior's and a heart as icy as the frozen North. But inch by delicious inch, Brandr means to make her melt...

Connie Mason is a New York Times bestselling author of more than 50 novels. She was named Storyteller of the Year in 1990 and received a Career Achievement Award from Romantic Times in 1994. She currently lives in Florida. Mia Marlowe is a highly acclaimed new voice in romance whose debut novel released in Spring 2011 from Kensington. She lives in Boston, MA. Together, they are working on a new Regency romance series for Sourcebooks Casablanca, the first of which will be in stores in January 2013. For more information, please visit http://www.conniemason.com/, http://miamarlowe.com/ and follow Mia on Twitter @Mia_Marlowe.
~*GIVEAWAY*~
Sourcebooks is giving away one copy of Lord of Fire and Ice to one US/Canadian reader today. To enter, just leave a comment or questions for Mia and then fill out the Rafflecopter below. Additional entries are available but not required. Good luck!
a Rafflecopter giveaway