Kate Brady is joining us today with her new romantic suspense and some 'scary' movies. Please give her a warm welcome!

Top Five Scariest Movies
Thanks so much for your interest in my top five scariest movies!  And please don’t think I’m dodging the question by answering it in the pathetic way I’m answering…

But the truth is, I don’t watch scary movies.  In fact, I hardly watch any movies at all.  Seriously.  I have trouble even naming five movies I’ve seen, let alone qualifying them as scary.  And of the movies I have seen, my husband can tell you: I haven’t seen the end of one in twenty years.  I generally fall asleep somewhere in Act One.

So I’m going back DECADES here.  Bear with me.  I don’t know how to answer this question without being brutally honest about my Scary-Movie-Quotient.  Sorry.

The Sound of Music
Yeah.  And not because the family is running from Nazis.  I mean, it was based on a true story, so we all knew they wouldn’t be captured and would escape over the mountains. So, while that was an exciting part of the movie, it wasn’t the scary part.
The scary part was that there were children dressed like curtains hanging from trees.  And there were yodeling goats.  Goats, mind you.  And there was a heartbroken father who almost fell prey to a downright cold witch—I mean, baroness.  And there was the pull of God—God, who you must admit, makes for a pretty daunting influence—who might have convinced Maria to leave the Family Where She Clearly Belonged.
I told you I don’t watch scary movies.

Finding Nemo
This one makes the list even though I haven’t seen it.  Why haven’t I seen it? Because it’s too scary.  See, my daughter saw this with her grandmother years and years ago.  And it scared my daughter so much that she made me promise to never bring it into the house.  Apparently, Finding Nemo begins with his mother being killed.  This traumatized my daughter so much that she never wanted to watch it again.  (Which was, in a sick way, sorta sweet…)
But it was annoying, too, because somewhere along the line, this story came to be used in writer’s workshops as a model of story structure and sequence.  I remember thinking, “I’ve got to rent that darn movie so I know what these clinicians are talking about.”
Okay, my daughter is eighteen now and currently doing a semester of study-abroad in London.  So I could probably go out on a limb and watch it now.  Except that my own childhood traumatic-movie-memory keeps me from doing it.
Bambi.  Remember Bambi?

Flightplan
Here is a scary movie I actually watched.  And not even on TV.  My husband and I went to the movie theatre to see this.  For us, that’s pretty amazing.
There is nothing more terrifying to me than: (A) a child in danger, and (B) a mother being told she’s crazy and not being believed when she KNOWS her child is in danger.
Those premises alone are enough to make me shiver.

Sleeping With the Enemy
Here’s another one that I actually saw.  This one is a classic romantic suspense: The wife getting up her courage to leave an abusive husband and start a new life, the sweet new lover coaxing her from her shell into a new relationship, and the crazed husband finding her and trying to kill her.  The fact that I (A) stayed awake and (B) still remember it (it’s been a long time!) is proof that it haunted me on some level.  It had a sort of low-level simmer to the suspense that was downright creepy.  And of course, a great romance to make it all okay!

Fatal Attraction
Well, this is just classic.  Scary in a way that sticks to your bones.  Partly that’s because Glen Close is so brilliant in it.  But also, it’s because it’s an everyday-situation-that-anyone-could-wind-up-in-after-one-terrible-mistake… And the fact that normal people, good people (if flawed) could wind up in such a terrifying circumstance just raised the fear factor higher.  This was a seemingly nice lady friend.  It was a nice couple, a nice family, in a nice home, with a nice bunny.
Eew.

Now, having written this, I think I have learned a couple things about “scary” and about myself.

1 – I really need to get to the movies more often.

2 – “Scary” doesn’t necessarily mean warships or men-in-hockey-masks or creepy aliens.   Turns out, even though I would never, EVER watch a bona fide horror movie, that there are plenty of ways to scare me in a movie.  The notion of being watched.  The notion of being ignored when you know there’s something wrong.  The ticking clock.  The threat that someone or something will come between the characters and their happy ending… All those qualify for me as “scary.”

Thanks for taking this (disturbing) peek into my (disturbed?) mind! 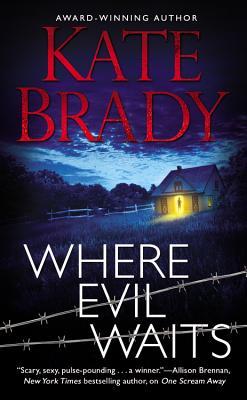 
SHE'LL RISK EVERYTHING
Special prosecutor Kara Chandler is very good at her job, so good that a homicidal mastermind vows to kill her and everyone she cares about. Desperate to save herself and her son, Kara seeks out cartel hit man Luke Varón. The last time she dealt with Luke, she saw him beat the system and escape prison. But now, the most dangerous man she's ever met is the only one who can keep her alive.

HE'LL STOP AT NOTHING
Luke Varón isn't who he appears to be. After spending years in the criminal underworld, he seeks redemption . . . and revenge. Yet when he sees the fear in Kara's eyes, he can't walk away. People around her are being murdered, and only he can help uncover the killer's motive. Now as danger closes in, Kara and Luke must trust each other with their darkest secrets - before the evil in their lives destroys them both.

His head came down. Kara gasped but his mouth smothered it, and she started to push back, then realized he wasn’t forcing her. He eased in close, his knife hand bracing against the top of the SUV while the other came to her cheek, warm and strong as his fingers threaded into her hair and he tipped back her head to better receive his kiss. A second later, she heard voices, people climbing up the path from the dock, their laughter choking to a halt when Kara and Luke came into sight.
Act like it.
Reality struck: It’s an act.
Her limbs loosened, her lips softened, and she gave in to the kiss. Varón slanted his mouth over hers, warm and mobile, and he pressed her against the hot metal of the SUV, marauding and suckling, the very scent and taste of him invading her senses. Frissons of sensation stirred to life at the center of her body. In the distance, the crunch of gravel changed direction— the intruders cutting a wider swath— even so, Varón didn’t stop. His tongue slipped out and traced the crease of her lips, seeking entrance.
A spear of sensation shot straight between her legs. Kara parted her lips and Varón was right there— filling her, possessing her, a tender, insistent invasion that made her knees wobble as his hand slid the length of her spine and pulled her close. She heard what might have been car doors opening and closing, then the hum of an engine coming to life, but the sounds didn’t matter. Her heartbeat deepened and her nipples rose against his chest, and when she reached up to grasp his shoulders, his muscles flexed and strained beneath her fingers. A groan resonated in his throat and his free hand smoothed down the side of her rib cage, his thumb brushing the outer curve of her breast and setting loose a cyclone of sensations whirling in her belly. Sensations she hadn’t felt for . . . forever.
His tongue left her mouth and he suckled her lips, then nuzzled her face to the side and trailed a path of fiery kisses down the curve of her jaw and up again. He stopped in the hollow just below her ear.
“They’re gone,” he whispered, his breath fanning warmth over her ear.
Kara went still. It’s an act, her brain chanted, and embarrassment soared in. She sank back against the SUV, unsure if she could stand on her own. He’d robbed her limbs of strength and her mind of every last thread of cognition, sucked the oxygen right out of her lungs. For one, steamy moment, she’d forgotten about feeling afraid and exhausted and confused, and instead had just been feeling. And for one insane moment, she’d wanted to let him keep going. Keep supporting her weight, keep shielding her from the world, keep kissing her as if he wanted to swallow her whole. Even now, after his proclamation that they were once again alone, his lips still breathed kisses against her temples as if he, too, was reluctant to let it end.
“Okay,” she breathed. “Then back up.” She slid her hands over his arms and laid them flat against his chest, a hot wall of iron. She managed to form a thought in spite of the craven lust that had left her feeling hollow and damp, and exerted just enough pressure that he straightened to allow an inch of space between them. His thumb grazed the corner of her mouth, his gaze snagging there.
“Good work,” he murmured, and brushed his lips against her temple. “Very convincing.”
She blushed deep red, grateful for the darkness. “I know how to act,” she said, and he finally stepped back.
“Apparently so.”
And that was that: a kiss that just about knocked her off her feet, from a murderer who held her life and her son’s life in his hands.
And for a moment, she hadn’t minded at all.


Kate Brady is a RITA Award winning author, choral director, university professor, wife, mother,  and caretaker of a variety of furry, feathered, and scaly pets. She lives with her family in Georgia, where she is currently at work on her next novel.

GIVEAWAY:
The publisher is giving away a copy of WHERE EVIL AWAITS to two readers, US/Canada only. To enter, please leave a comment on this post: What movie makes  your top 'scariest' movie list? And then fill out the rafflecopter below. Good luck!