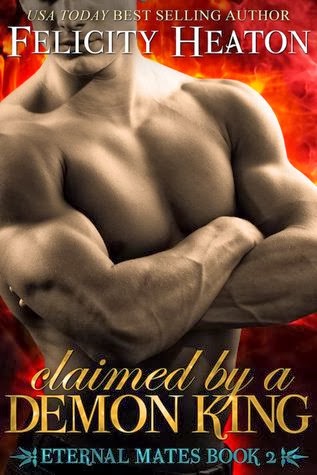 Title: Claimed by a Demon King


The moment the demon King Thorne of the Third Realm set eyes on the mortal huntress Sable, he knew she was his fated one. The fiery, dangerous female awakened hungers he had never experienced before, a dark craving and passion that has consumed him in their time apart. As the lunar cycle wanes, she enters his world again and nothing will stand in the way of him claiming his forever with her—not the relentless assault from the Fifth Realm or the dark elf male determined to seduce her out of his grasp.
Intent on achieving the coveted position of commander at Archangel, Sable leads her small team into the dark underworld and the Third Realm, to a war where her allies are the very creatures she normally hunts—vampires, werewolves, and demons. Her eagerness to lead the deadly mission has everything to do with winning her promotion, and nothing to do with the kingdom’s brash, lethally seductive demon king—a king who stirred fierce desire and wildfire heat in her with just a look and an innocent touch when they first met, and has been in her wicked dreams ever since.
As the gathering storm between rivals unleashes irresistible passion that flares white-hot and the heat of the battle brings life-shattering realisations, can Sable place her duty before her heart? Or will she surrender to her deepest desires and be claimed by a demon king?

Claimed by a Demon King is available from Amazon Kindle, Kobo Books, Barnes and Noble Nook, Apple iBooks stores and other retailers. Also available in paperback. Find the links to your preferred retailer at: http://www.felicityheaton.co.uk/cbadk

Heaton pulled it off again with book two of the Eternal Mates series, Claimed by a Demon King pulled me out of a reading rut and renewed my faith in good books!

There is no slump for book number two in this series, instead Claimed by a Demon King picks right up where Heaton left us at the end of Kissed by a Dark Prince. Remember that? The wonderful mix of paranormal beings: Prince Loren the elf happily standing beside his new scientist mate Olivia. And Olivia’s best friend Sable the huntress, who seems to have triggered the mate flag in the Demon King Thorne and the elven warrior Blue. Oh and the whole Third Realm being under attack and Archangel offering up some of their hunters to aid the Demon King. So much going on and we were left waiting!

The wait was so worth it. Right off the bat you get to feel Sable’s anticipation for meeting Thorne again. This battle hardened warrior is baffled with these new feelings of attraction...to a demon! You expected to hear elf didn’t you. Unfortunately for our handsome Blue, Sable’s heart is drawn to Thorne. There is a very real moment between Blue and Sable, makes you want to cry for Blue and cross your fingers that he will get his HEA in book number three. Hint, hint Heaton!

As attached as this reader was to Blue, Thorne truly stole the spotlight. He was amazing! So proud and alpha, yet he respects and honors his deceased parents and works to win over his woman. He is a man who holds the keys to the kingdom but knows without the love of the one who was made for him it is worth nothing. You can hardly blame the guy for going ballistic at the other males who look at Sable.

Thanks to Thorne you have a large combining of elves, weres, vampires, demons and humans. All of them are, sort of, joining together to protect the Third Realm from attack. All these strong personalities and prejudices lead to some cheap shots and scheming. But it is the introduction of another paranormal being that results in King Thorne leaving his realm and being locked out. That leaves Thorne, Sable and Blue who recruit a witch to break back in and join the battle. A great ending to this action packed book and a lovely little surprise about Sable. Of course Heaton leaves us impatiently waiting for book three.

Do you have a sense of déjà vu too? Guess that means Heaton did it again, four wine review for Claimed by a Demon King!