Robert: So…Bubba. What made you decide on that for a name? You like to make things hard for your heroes?

Jessie: No! That name has a special place in my heart. My best friend when I was toddler was named Bubba. We live on neighboring farms in Louisiana. We were the only toddlers around and our moms were besties, so I guess we had to be friends, but I still have very warm memories of him.

Jessie: Really, he was such a sweet little boy with beautiful brown eyes and an amazing laugh. (sighs) He was my first crush.

Robert: You started young with this romance thing.

Jessie: We used to take baths together when we were two.

Jessie: It was an innocent baby thing! And honestly, I never meant to write a story about you. You were just the best friend character in LEATHER AND LACE. When I named you I wasn’t thinking about you being the hero of your own story.

Robert: Now my feelings are hurt.

Robert: Cowboys have feelings too, you know.

Jessie: I do know! And I had a lot of feelings for you. I totally fell for you while I was writing LEATHER AND LACE. You were such a great friend to Mia and so sexy-on-the-down-low. I had to give you your own story. I rearranged the entire series so you could have your own book. Now don’t you feel special?

Robert: I do. I appreciate having the chance at a happy ever after.

Jessie: All the best men do, though not all are brave enough to say it. (sighs dreamily) You really are so sexy, Bubba. I heart you hard.

Robert: (inches away) I’m sorry, ma’am. But I’m both taken, and fictional.

This interview has been brought to you by the letter “B” for Bubba and Book Boyfriend, the letter “C” for crazy author, and the letter “S” for Saddles and Sin. 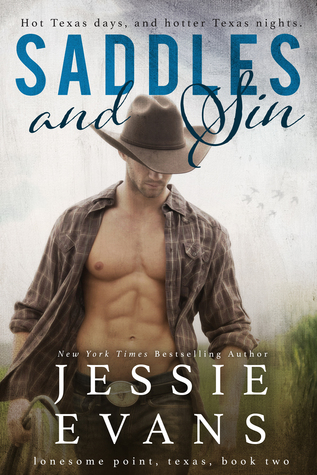 Even sweet cowboys have a sinful side…

Robert Lawson—Bubba to his friends—is six feet, four inches of tall, dark, and handsome cowboy, with a panty-melting voice and a face made to launch a country music career. But when his family’s ranch hands go down with the flu, Robert cancels his high-profile auditions in Austin, and returns home to Lonesome Point to help out. Fortune and fame are all well and good, but family and friends come first. Besides, he’s ready to enjoy some off-the-clock time with his manager, a woman who has him dying to show her what a good man can do to a woman when he’s given permission to be bad.

Marisol Medina has been looking for her golden ticket since she became a country music manager. A scandal with one of her clients nearly destroyed her, but now she's close to launching an artist who will make her career. Robert Lawson has it all—talent, charisma, and a naughty side that flicks all of Marisol’s kinkier switches. But Robert is off limits. She refuses to mix business and pleasure, even if it will be hell resisting temptation while spending a week at the Lawson family ranch, doing her best to convince Robert to ditch the saddle and embrace his future as a star.

But as Marisol and Robert grow closer and the passion between them ignites, Marisol must decide if fear is stronger than love, or if a chance at forever is worth breaking all her rules.

New York Times and USA Today bestselling author, Jessie Evans, gave up a career as an international woman of mystery to write the sexy, contemporary Southern romances she loves to read.

She's married to the man of her dreams, and together they're raising a few adorable, mischievous children in a cottage in the jungle. She grew up in rural Arkansas, spending summers running wild, being chewed by chiggers, and now appreciates her home in a chigger-free part of the world even more.

When she's not writing, Jessie enjoys playing her dulcimer (badly), sewing the worlds ugliest quilts to give to her friends, going for bike rides with her house full of boys, and drifting in and out on the waves, feeling thankful for sun, surf, and lovely people to share them with.