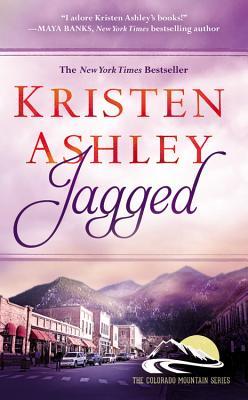 
The next novel in Kristen Ashley's sizzling Colorado Mountain series introduces a new electrifying relationship that turns Carnal, Colorado into a hotbed of action, romance, and suspense.

Zara Cinders always knew Ham Reece was the one, but he wasn't interested in settling down. When she found someone who was, Ham walked out of her life. Three years later, Zara's lost her business, her marriage, and she's barely getting by in a tiny apartment on the wrong side of the tracks. As soon as Ham hears about Zara's plight, he's on her doorstep offering her a lifeline. Now, it will take every ounce of will power she possesses to resist all that he offers.

Ham was always a traveling man, never one to settle down in one town, with one woman, for more time than absolutely necessary. But Ham's faced his own demons, and he's learned a lot. About himself, and about the life he knows he's meant to live. So when he hears that Zara's having a rough time, he wants to be the one to help. In fact, he wants to do more than that for Zara. A lot more. But first, he must prove to Zara that he's a changed man.

My eyes opened, my pulse spiked, my nipples ached, my sex throbbed, and my skin was damp.
I’d had another freaking dream.
“God, this sucks. This fucking sucks,” I whispered into the dark.
I turned, trying to beat it back, finding it difficult at night, the dream so fresh, so real, and Ham in bed down the freaking hall.
I tossed, considered getting out my toy and taking care of business but Ham was down the hall. He slept like me, hard and deep. I didn’t know him to wake up in the middle of the night but, with my luck, I wasn’t taking chances.
Nina suggested I be quiet while I took care of business but that was impossible because my toy was not quiet and, well, I wasn’t either. I wasn’t loud but I made noises. Who didn’t?
I didn’t know if I could squelch them and I was too afraid to try.
I turned then tossed and it didn’t leave me.
Basic needs.
Ham’s words hit me at the same time it hit me I had them, too.
Basic needs.
Oh yes. I had them, too.
“Damn,” I whispered.
It was then Nina’s words came to me.
Roll the dice.
“Oh God,” I moaned.
Except for that disastrous night at The Dog, Ham had not once spent the night somewhere else.
And, if memory served (and I knew it did), he had a high libido. When we were together, we would go out and do stuff, chat, cuddle, goof around.
But we had a lot of sex.
Even knowing my mind forced by my desires, my need, was leading me through a ludicrous rationalization, I threw the covers back and got out of bed.
Then I sat back down on the bed.
“What am I doing?” I asked the dark.
Roll the dice, Nina urged.
I could roll the dice. Just that. Roll the dice.
Ham could say no. He could turn me away. That would be mortifying but I was already dealing with tough crap with regards to Ham on a day-to-day basis. I could live with that.
Or, if I rolled the dice, we both could understand we knew what this was and we could give each other something.
I pushed up from the bed and headed to the door.
“This is crazy, stupid, scary,” I whispered.
I still opened the door and walked down the hall to Ham’s room.
I stopped at his door.
Was I going to do this?
I opened his door.
I guessed I was.
I moved to his bed. He was on his side, facing me. He had the blinds open and a hand shoved under his pillow. The covers were to his waist and he had nothing on up top. Not unusual. If it was cold, Ham would put on pajama bottoms but mostly he slept nude.
Even in the dark, he was hot.
I sat on the side of his bed and he jerked awake, sitting up, his hand flashing out and curling, hard and tight, around the back of my neck as I gasped.
He came fully awake. His hand didn’t leave me but it relaxed and he growled sleepily, “Jesus, fuck, you scared the fuckin’ shit outta me.”
And I would. I hadn’t thought about it but the last time someone snuck into his room while he was sleeping, they’d been wielding an ax.
“God, Ham, I’m sorry. I didn’t think,” I whispered, lifting a hand and putting it on his chest, feeling the crisp hair there, wanting to slide my fingers through so badly, my mouth watered with the need.
His hand slid to the side of my neck.
“You okay?” he asked.
“No,” I answered.
“You sick?” he asked.
“No,” I answered.
“What’s up, baby?”
Before I lost my courage, I blew on the dice and let fly.
In other words, I leaned into him, aiming fortunately accurately, and my mouth hit his.
His body stilled.
I touched my tongue to his lips.
His mouth opened.
My tongue slid inside.
Then I was on my back in his bed, his arms around me.