Author Donna Augustine is joining us with her urban fantasy series, Alchemy. Enjoy!

What in the World?

One of the reasons I love fantasy so much is for enjoyment of reading about new worlds. But, I always want to know who those worlds came to be. That's why when I wrote the alchemy series, I started before the world changed. I wanted to build the world from the ground up with the readers seeing the progression, step by step. It took a couple of books to lay the groundwork, but by the time I got to Shattered, the third book, I was in full world building swing and boy was it fun. When you build a new world, it's all yours. You can do anything you want, from talking lightning bugs to casinos that morph into castles. There are no boundaries. Anything you can dream up becomes a reality inside of those pages. Maybe that's why so many people enjoy new worlds. In a life filled with boundaries, it's nice to roam around and live vicariously in the impossible, even if just for a snippet in time. 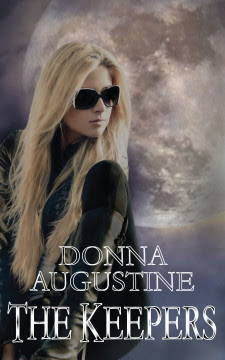 The Keepers (Alchemy #1)
by Donna Augustine
The first book is now free on Amazon, Barnes and Noble, iBooks and Kobo!

Two days ago, Jo Davids was a waitress by night and a college kid by day, with the unnerving problem of things floating around her.
One day ago, Jo's sexy boss, Cormac, noticed her for all the wrong reasons when she witnessed a man transform into a monster in the basement of his casino.
Today, Cormac ordered her shot. If he's real lucky, she won't die. Because if she does, all hope is lost.

The room fell deadly quiet as Hawking walked toward the wall of windows and all three of us watched his back. I knew my life, or death, was being decided as we waited. “I don’t know who you are, or what, but if you kill me, there will be a herd of people coming for you.” Other than the Harvey’s and Lacey, I wasn’t sure anyone would even know I was gone, let alone a bloodthirsty hoard seeking vengeance. “If we don’t do it, you know what we’ll have to deal with. Not to mention, it might be kinder this way,” the man named Dodd interjected, sensing the wavering in Hawking. “Could my day get any worse?” he said to the room in general. “Really? You’re complaining about your day?” I responded. Hawking smiled at me, but it was more of the bittersweet variety. “You’ve got a lot of spunk,” he said. He turned his back and stared out the window, his body going deathly still, then a burst of motion as he punched a perfect hole through the glass window. I knew my fate had just been sealed, as I looked at the bloodied hole he’d left behind. He didn’t say anything, and he wouldn’t look at me, just nodded his head and walked from the room. “Sorry, but this is much larger than you,” Dodd said apologetically in my direction. “Fuck you,” I replied calmly. He didn’t seem fazed at all, just gave me a sad smile, like he regretted this as well, but not enough to save me from the fate I’d just been dealt. He shook his head, as he eyed me up and down. “What a waste. Make it quick Buzz.” I looked at Buzz and saw the gun he now aimed at my head. “You better hope that there isn’t an afterlife because I’ll haunt your every last step.” I refused to cry or grovel. If this was the end, then so be it. I’d lived a tough life, and there was no way I’d spend my last minutes groveling to these assholes. The last thing I heard was a gunshot. My last feeling was exploding pain, like nothing I’d ever experienced in my life. And then nothing.