We'd like to share with you an excerpt from Lori Foster's latest release in her Love Undercover series, Dash of Peril! 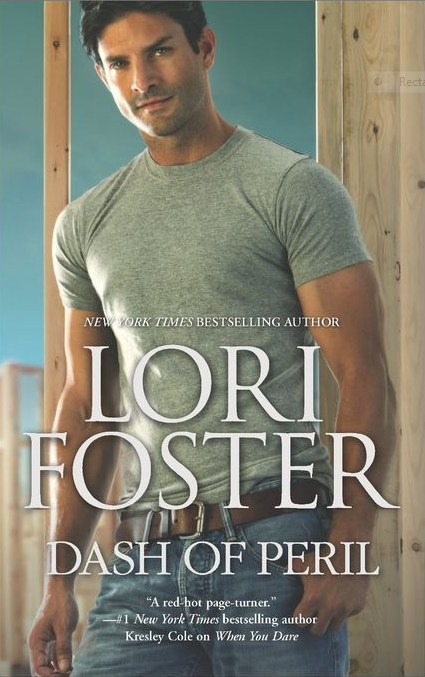 
To bring down a sleazy abduction ring, Lieutenant Margaret “Margo” Peterson has set herself up as bait. But recruiting Dashiel Riske as her unofficial partner is a whole other kind of danger. Dash is six feet four inches of laid-back masculine charm, a man who loves life—and women—to the limit. Until Margo is threatened, and he reveals a dark side that may just match her own….
Beneath Margo’s tough façade is a slow-burning sexiness that drives Dash crazy. The only way to finish this case is to work together side by side…skin to skin. And as their mission takes a lethal turn, he’ll have to prove he’s all the man she needs—in all the ways that matter….

DASH LEANED AGAINST the wall outside the bathroom, listening to the occasional ripple of water. In his mind, he could almost see her, so strong and brave and independent.
But equally small and soft and so badly hurt.
He pressed the heels of his hands to his gritty eyes, trying to fight off the exhaustion. Now that he had Margo back in her own home, safe and sound, the adrenaline dump left him weary. “You’re not getting the splint wet, are you?”
“No, I’m not.”
Hearing the strain in her voice, he wanted to curse. The doc claimed her arm would cause considerable pain for at least a few days.
Struggling in and out of the tub, washing her hair, soaping up her body…
Damn, but the visuals were killing him.
“Margo? You sure you don’t need any help? You have to be hurting.”
“I’m okay.”
Damn it. Why wouldn’t she trust him a little?
He pushed away from the wall, paced a few feet and came back. He felt ridiculous, fretting outside her door, waiting for her to admit that she needed him.
He had a feeling she would prefer everyone see her as a hard-ass. When it came to him, she was doomed to disappointment.
He waited another five minutes, then said, “You need to come out now, Margo.” Much as he relished the thought of assisting her, if she fell asleep in the tub she could end up hurting herself more.
“I am.”
He waited. If she were any other woman he’d be treating her with kid gloves. But this was Lieutenant Peterson, the ballbuster, and he knew her well enough to know she’d detest sympathy.
When the door opened, he straightened in anticipation.
She hadn’t really dried her hair and little rivulets of water ran down her silky neck and disappeared into the collar of a large, soft robe that fit over her splint and was only loosely tied around her petite frame. Without makeup, the stitches and bruising were even more obscene.
His heart gave a soft thump—and he knew he was a goner.

Since first publishing in January 1996, Lori Foster has become a Waldenbooks, Borders, USA TODAY, Publishers Weekly and New York Times bestselling author. She also received the Romantic Times “Career Achievement Award” for Series Romantic Fantasy and Contemporary Romance. Lori believes it is important to give back to the community as much as possible, so she routinely arranges events among authors and readers to gather donations for various organizations.